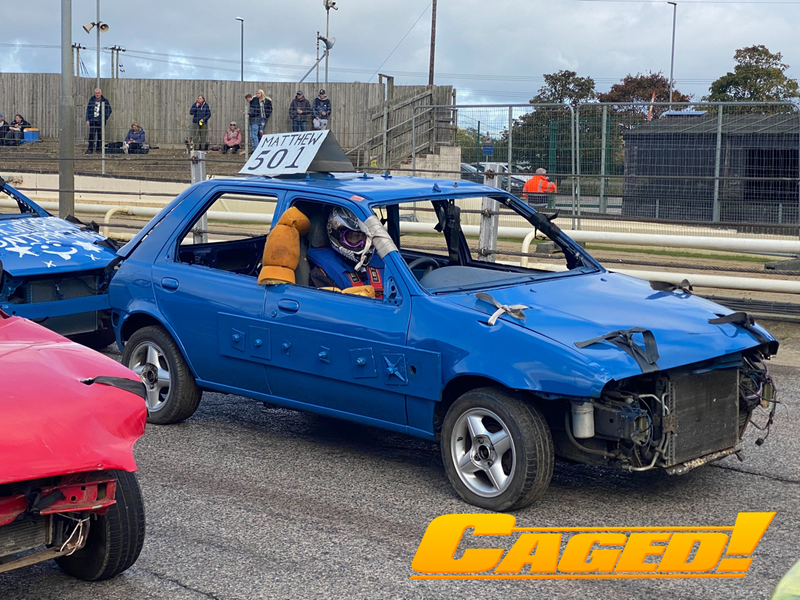 The summer season at Yarmouth Stadium drew to a close on Thursday 2nd September, with the back to basics in decent numbers once again with 37 cars in attendance. 621 Gareth Parker’s Mk3 Vauxhall Astra and 367 Barry Beevor’s Ford Escort were the standout vehicles against the more dominating cars.

The first two heats saw a half car split to break up the evening slightly. Heat 1 begun with 730 Brandon Mayes spinning 14 Barry Payne; the green and yellow fan base wouldn’t have been happy with that one! 293 Ben Smith removed 173 Luke Spall. 350 Lee Wright marked his return from a long hiatus by spinning 19 Darren Mansi. 621 Gruff hit the marker tyres and got some large air but landed and continued on his way. 350 Wright, 717 Michael Booty and 145 Billy Gladden all crashed out on the Caister bend. 125 Kyle Pearson ran into 173 Luke Spall’s lame car. 28 Scott Green spun 14 Bazza, before 350 Wright spun 97 Tracy Scott into the marker tyres. A great scrap for the lead saw 629 Ewan Rout spin 70 Vinnie McCarthy on the exit of the pits bend, but this slowed Rout down enough to allow 730 Bubba to dump him into the tyres at the end of the back straight. This allowed 155 Sam Coote to move in and punt 730 Bubba wide to become the fourth person to lead within half a lap. 367 Beevor spun 621 Gruff, but the latter recovered quickly enough to reel his attacker in and dish out a spin of his own. 155 Captain Slow raced to the win ahead of 730 Bubba and 621 Gruff, a pile up forming on the run down lap leaving 155 Captain Slow’s Mini axle looking worse for wear.

Heat 2 started with several coming together down the back straight. 543 Tommy Miller spun 540 Adam James, and 791 Michael Day spun 414 Jimmy Craig. 22 Ben Love had a nibble at 666 Adrian Finch, the latter then being spun by 349 Jess Payne. 760 Harry Spencer pushed aside 212 Chris Bartrum to take the lead at around the half way stage. 543 Turbo Tommy attacked 791 Day, who held off the spin admirably. 760 Hazza spun 22 Love, before other rental driver 791 Day rolled on the pits bend bringing the race to a pause. 760 Hazza still led with 2 laps to go, the only other action coming as 456 Drew Finch tangled with 349 Jess Payne. 760 Harry Spencer held on to take his maiden race win, with 212 Chris Bartrum taking second and 414 Craig making his journey up worthwhile with a third.

The Final begun with 141 Snakey striking early, spinning 213 Carl Musson. 717 Booty tangled with 760 Hazza. 350 Wright rolled on the pits bend creating a complete restart. 212 Barty spun 85 Thurlow as the race got under way again. 141 Snakey tangled with 349 Payne, before 760 Hazza ran someone into 70 McCarthy’s car on the pit bend. 14 Bazza spun 367 Beevor before 666 Finch ran into the carnage that was growing on the pits bend. 760 Hazza slowed the leading 145 Gladden, the former copping a rear wheel shot from 414 Craig for his troubles. 687 Miller jacked 760 Hazza, the latter responding by turning around and meeting 687 Miller head on coming out of the pits bend; the two then going on to have a private DD on the infield. The race continued on however, with 85 Thurlow getting launched into the back of 293 Smith. 367 Beevor tangled with 548 Big Al. 14 Bazza spun 414 Craig down the back straight, and 85 Thurlow delivered the same treatment to 818 Brown. 173 Chunk spun 717 Booty, who rolled and landed in spectacular fashion. 48 Grummy turned 349 Payne fence-wards earning himself a disqualification whilst up in the places. 175 James Emmerson spun the recovered 717 Booty. 14 Bazza spun 145 Gladden, before 85 Thurlow jacked 349 Payne. 414 Craig jacked 85 Thurlow. 548 Big Al drove through 173 Chunk, but immediately came under fire from 818 Brown. Big Al rallied on to drive through 414 Craig, as 22 Ben Love made his rental experience worthwhile taking the victory, ahead of 175 James Emmerson and 621 Gareth Parker, the latter ending the action by steaming in on 414 Craig.

Overall, a fantastic finish to what has been a brilliant summer season at Yarmouth.