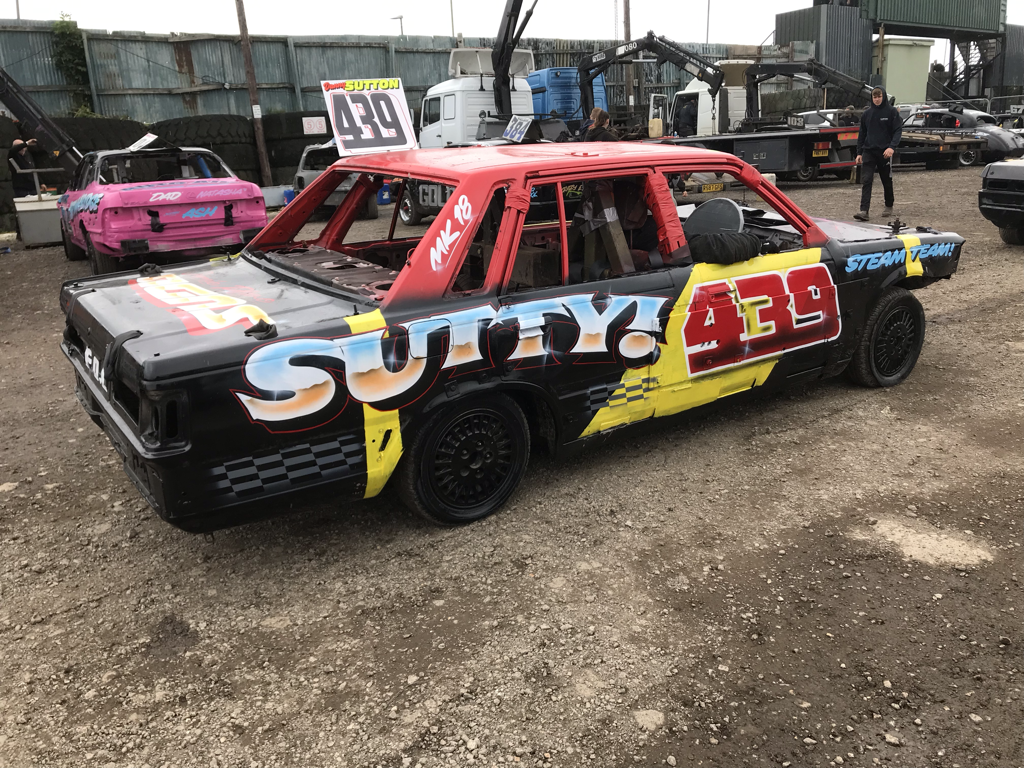 The second annual old school style Team meeting at Skegness Raceway took place on Sunday 16th June; the main switch seeing the Pre 85 format revised to a Pre 90 format for this year’s event. The Unlimited Pre 90 Teams were joined by the Micro Bangers creating a day of all banger action. The hype in the week leading up to the meeting certainly lived up with some stunning paint and motors on display. Team Extreme/TYG Extreme set a very high marker to top with eight superbly turned out Toyota Crowns – 622 Gazza and 362 Drifter having the top ones with an S60 Custom Estate and S60 Custom respectively. Keeping with the Jap side of things, and Steam Team pilot 439 Sutty had a well turned out Nissan 300c, the 18th of his career which is another standout stat from the meeting. The Aftermath opted for a bit of tin with 100 Cock having a stunning Daimler DS420 Limo and 476 Rosco bringing a crusty Daimler Majestic Major. There was a pair of Series 1 XJs for Team Black young gun 356 Harry Overy and VS Massive man 960 Ross Winsor. Damage Inc saw a pair of yanks – 548 Big Al with the car of the meeting with his stunning Oldsmobile 88 Hardtop and 433 Smith had a facelift Mk5 Lincoln Continental. 200 Noon had a Rolls Royce Silver Shadow. There was a pair of fresh Mk2 Granadas – 22 Dave Vincent with a saloon and 632 Reedy Jnr had a timeless looking Estate. 77 Patch rarely goes without material and had a smart Mk9 Jaguar to complete the fresh material.

Heat 2 commenced with SB451 Willie attacking AA171 Frosty which also took out AB476 Rosco. BLA77 Patch jacked AA171 Frosty. Aftermath revenge was swift as AA100 Cock jacked BLA77 Patch. TYG209 Tombo destroyed AA171 Frosty with a solid air time shot which led to a race stoppage to allow 171 Frosty to exit under his own steam. The race resumed with BLA617 Overy following in AA603 Hitman in savage fashion. BLA617 Overy continued his assault on the Aftermath picking up AA476 Rosco and smearing him around the metal plating. 3L252 Boogie spun TYG204 Charlie Boy to conclude the action as BLA907 Bradford raced to the win ahead of TBB673 Fendley and TBB632 Reedy Jnr. The Entertainer Award rightfully going to BLA617 Overy on this occasion.

Whilst the cars were lining up for the second set of Unlimited Heats, it was announced that the Material Team Award was to be given to Team Extreme, whilst TYG Extreme swept the Best Paint Award. There was also 10 Individual Awards handed out for various accolades such as smart paint or material and these went the way of AA476 Rosco, AA100 Cock, DI548 Big Al, DI433 Smith, BLA77 Patch, ST439 Sutty, BLB356 Overy, VS960 Rossco, BBA200 Noon and BLB384 Goldie.

Unlimited Heat 4 commenced with VS960 Rossco spinning father VS160 Winsor as they tangled. TM440 Pedro had a pop at SH174 Little Rath. BA33 Magic spun aside TM226 Youngston for the lead; the latter then crashing out in a collision with SH174 Little Rath. BLA617 Overy treated the spun TM297 Linton to a head on. Mob revenge was swift as TM440 Pedro went in on BLA617 Overy. BLA67 Beasley jacked TM440 Pedro, leaving the latter prone to a jacking from TE362 Drifter. BA33 Magic took the win ahead of ST22 Vinno and BA332 Reedy.

The Micros Heat 4 commenced with 248 Blything spinning 254 Wylie who nearly rolled as a result. 400 The Boy ran 249 Ashbridge into the marker tyres, which also claimed 248 Ashbridge. 68 Rocketdog weighed in on 248 Ashbridge only to be ruined in turn by a solid balls out shot from 72 Bondy. 374 Carter attacked 155 Bastow. 40 Lester followed in 31 Woody. 374 Carter jacked 155 Bastow, only to then come under fire from 40 Lester. 743 Barton assaulted 155 Bastow as 400 Lee Kingsnorth raced to the win, whilst 72 Bondy was given the race entertainer.

The Unlimiteds returned for their Final which commenced with DWO239 Nemesis giving a head on to GB399 Noodles. TE622 Gazza followed in BBB591 Blower. AA476 Rosco jacked BBB591 Blower. DWO239 Nemesis tboned TYG262 Axle. GB882 Foster attacked DWO838 Sloth. TE362 Drifter jacked DWO838 Sloth. GB180 Sparky jacked DWO838 Sloth. VS960 Rossco tboned AB602 Mr Moody. DI247 Bro jacked DWO838 Sloth. BLA907 Bradford attacked TE622 Gazza. The reds came out for a lose wheel and AB602 Mr Moody was in need of assistance after copping an accidental dooring. He got out after a few moments and was assessed by the medical team, but all was ok. The restart saw DI548 Big Al run in DWO239 Nemesis. DI821 Dangerous jacked BBB181 Doe. DI433 Smith gave a head on to DWO239 Nemesis. BLB760 Joey Reynolds raced to the win ahead of BB632 Reedy Jnr and BB673 Fendley. BB632 Reedy Jnr finished with a follow in to 3L252 Boogie. 3L702 Jimbo jacked BB632 Reedy Jnr. BLA77 Patch storming shot on 3L702 Jimbo which rounded off another top race of action and helped towards him getting the entertainer award.

With the results and points totted up, Team Black A took the win ahead of Team Black B and Team Blitz B.

Another stunning session at the East Coast track proved once again what an underrated track Skegness is and can definitely produce the goods with the right amount of numbers with action in both classes all day. Well done to Team Black A who added another win to their team roll of honour whilst 838 Sloth stood out as man of the day, undoubtedly earning himself a lot of respect.