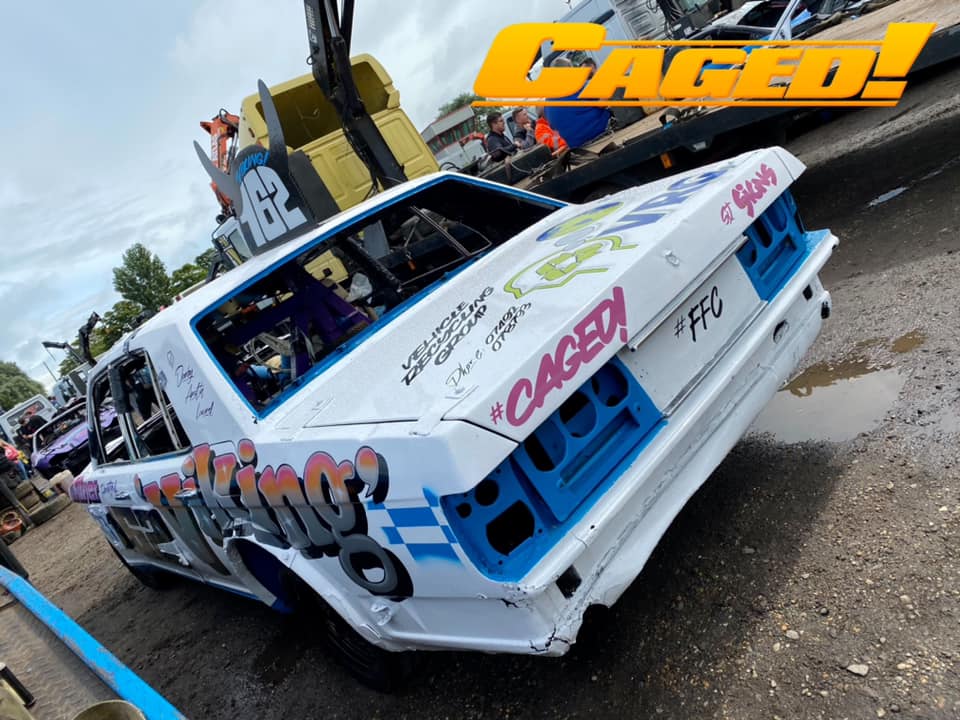 The eagerly anticipated meeting of the BWS Series, the Yarmouth round, took place at the seaside venue on Sunday 22nd August, with an impressive 70 cars in attendance. Among those in attendance was Autospeed World Champion who had his sixth Toyota Crown of the World Series with a very smart S80 variant; this feat being even more outstanding given how thick and fast the fixtures have come recently. Caged’s favourite afro-haired driver, 162 ‘The Viking’ Brent Shaw piloted a smart Rolls Royce Silver Spirit. The material didn’t stop there, with all top tin being painted smartly too. 246 Aston Burt was at the wheel of the UK’s second Jaguar XK8, 360 Jack Reynolds favoured a trusty Volvo, with a 242, whilst 129 Joe Skutela opted for a 240 Estate. 288 Carl Sowter had a smart Jaguar XJ40, and on the modern front 77 Aario had a well presented Lexus 200 with 542 Craig Oliver’s Volvo 740 Estate being smartly signwritten with some additional war paint, and 262 Rob Bugler was out in a typically tidy Supra.

Heat 1 began in epic fashion with a huge push into turn 1 claiming more or less all the pack; the main focal point being the enormous airtime that 548 Alex Utting got, with 246 Burty Jnr’s XK8 on the back end of the Damage Inc man’s Supra leaving it well and truly snapped. Other casualties included 124 Carl Korszewski and 821 Ryan Preston who both ended with their boots tucked well up, the former’s being bad enough to end his day. The restart saw 876 Ronnie Hammond bury 203 Darren Nash into the remaining dead cars on the Caister bend. 28 Fred James spun 876 Ron, the former then taking a shot from 288 Sowter on oppo. The leading 158 Shane Davies tangled with 820 ‘Maggot’ Martyn Perkins along the back straight, bouncing him off a post costing him time allowing the chasing pack to close in. 625 Josh Gooch spun 447 Nyall Hardingham out of contention, and 288 Sowter again went on the attack on oppo, this time claiming 120 Lewis Campbell. 28 Jamesie drove through 288 Sowter in revenge from the earlier attack, and then continued on to launch 120 Campbell into the pile of dead cars. 516 Carl Gould stayed out of trouble to take the win, ahead of 2l World Champion 456 Nathan Roberts and 625 Gucci.
516, 456, 625, 158, 639, 120, 447, 203, 28, 542

Another big first bend push saw half the pack go in at the start of Heat 3. 760 Joey Reynolds stopped 331 Jason Jackson with a head on coming out of the Caister bend. 114 Lakey used his Crown to deliver a head on to 262 Roona. 114 Lakey completed a lap before leathering 262 Roona. 360 Jackstar went in on 114 Lakey. 66 Darren Geary delivered a head on to 331 Boxer Jack, who also received the same treatment from 360 Jackstar a moment later. 4 David Wilde ran 555 Harry Gelsthorpe through 360 Jackstar, the latter soldiering on to administer a solid tbone to 932 Rhys Reed. 215 Callum Gould delivered a flat out head on to 201 Phil Milner, after a previous failed attempt which saw the Gladiator man dive for the centre green. 114 Lakey jacked 360 Jackstar, and leathered him once again a lap later. 331 Boxer Jack done a full lap on oppo before tamely going in on 760 Joey. 360 Jackstar clocked this, and turned it around to give 331 Boxer a jacking. 114 Lakey homed in for a shot on oppo to 360 Jackstar. Among the chaos on the Caister bend, 111 Joe Cotton avoided coming in to harms way to take the win; 570 Jordan Cumming taking second and 4 Wildy came home third.
111, 570, 4, 136, 114, 699, NOF

In typical BWS Wildcard fashion, all heat winners completed a coin toss, where their fortune would be decided as to whether they would start at the front or back of the grid. Lady Luck wasn’t on any of their sides, as all heat winners chose incorrectly having to go round to the back of the pack. 548 Big Al limped his Toyota Supra on to the track that he and his team had miraculously managed to salvage from the certain wreck it appeared to be after heat 1. This received a great ovation from the crowd, but it was deemed by the meetings’ stewards that the car was definitely too far gone and thus unsafe to race, but Al was treated to a plethora of applause as he completed a lap of the track before entering the pits again.

Another superb display from the boys and girls out on track, with some evenly matched displays out in the pits too! It’s a crying shame that Yarmouth doesn’t get as many ‘big’ fixtures like the BWS round throughout the year as it proves year upon year the potential it has, as no doubt again, this years’ meeting will feature highly at the end of year awards for meeting of the year contender. The BWS moves on to Spedeweekend at Ipswich, where the bangers will feature on the Saturday.