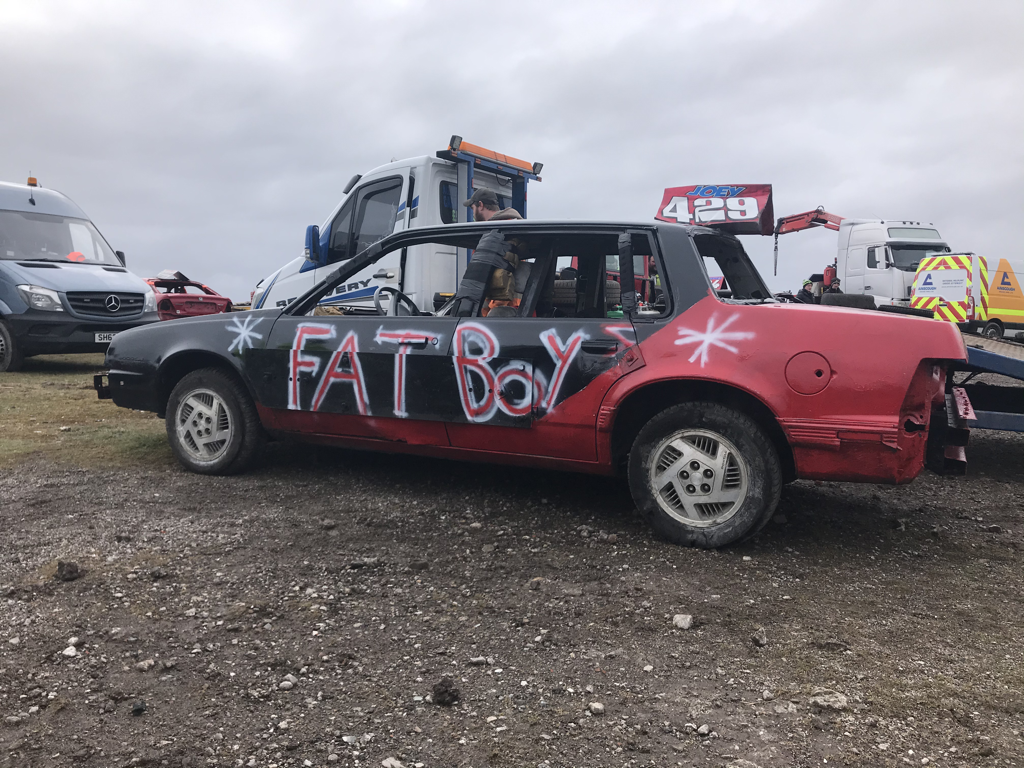 Sunday March 15th saw the annual Metal Mania meeting take place for Unlimited Bangers at Warton Raceway, with Junior Bangers also on the bill. It was the first time the meeting was backed by Northern Bangers, so Bryson took his maiden voyage to the North West to see what the track was all about. 27 cars made the journey in total. There was not much on the tin front other than some bilge including 712 Alex Hatcliffe’s Rover 800 Limo, a pair of Kia Sedonas for 36 Beagle and 114 McKenna, a Peugeot 807 for No Respeckt pilot 181 Cadnam and a Pontiac for 429 Joey Staverley.

22 cars were on track for the Junior Rookies first Heat which took a while getting under way with a couple of false starts. 14 Rocket spun 476 Freddie Jay. 749 T-Bone Jnr went in after a tangle with 14 Rocket. 655 Shelby collected 749 T-Bone Jnr as 209 Zack Pears won from 06 Thomas Rawsthorne and 224 Luke Pattinson.

The remaining 14 drivers hit the track for Heat 2 for the Unlimited Bangers. 32 Crazy Conker put away 478 Chucksy. 152 Magnus went in on 32 Crazy Conker, the latter jacked in turn by 36 Beagle. 360 Jackstar followed in 55 Smiggy. 355 Mullins ran in 477 Wacko. 712 Stig Jnr set about 114 McKenna, and then went on to have a go at 152 Magnus. 712 Stig Jnr went in under his own steam and was jacked by 181 Cadnam in turn. 114 McKenna then delivered a fully un-needed DSU hit on 712 Stig Jnr with the reds coming out for the latter as he required medical assistance with a slight concussion although he became worse for wear in the pits so was sent to Lancaster Hospital and we are pleased to report that Alex (Stig Jnr) was released later in the evening with nothing to report. At this stage, the race was declared in favour of 591 Marc Blower and only 5 going the distance.
591, 782, 886, 114, 152, NOF

6 cars returned for the Unlimiteds Dash for Cash. 266 Big Al ran in 152 Magnus from the off. 36 Beagle expired along the home straight with 360 Jackstar lengthening him taking the brink of the hit himself. 266 Big Al jacked and ran in 360 Jackstar before the reds were called for the latter who exited all ok. The restart saw only 760 Joey, 200 Noon and 266 Big Al remain for only 6 laps and they stayed in that order. It was straight into the DD where 5 cars took part. 760 Joey set the ball rolling by tamely going in on 478 Chucksy. 55 Smiggy launched himself over the curb getting some ridiculous airtime. 760 Joey followed in 55 Smiggy. 478 Chucksy jacked 760 Joey whilst Leveller teammate 477 Wacko jacked 55 Smiggy. 200 Noon jacked 477 Wacko. 478 Chucksy and 200 Noon shared a head on before the Blooz Boyz man jacked the former and lined him up perfectly to complete a lap and tbone the Leveller to take the win and round off a great day of action.