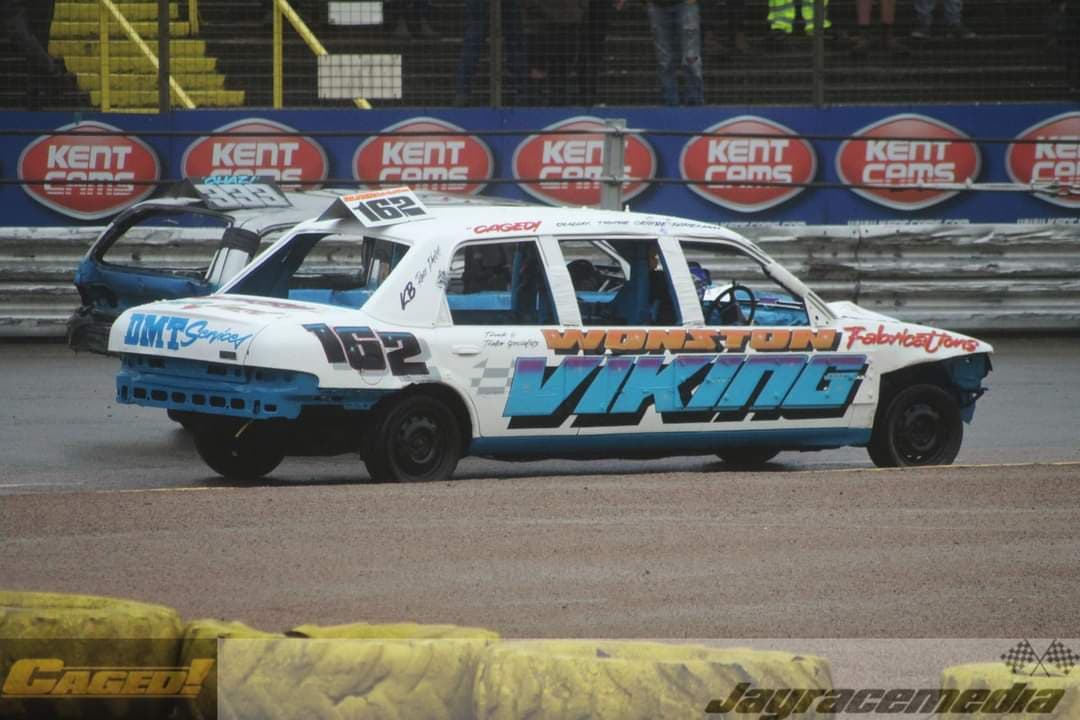 After a four-month hiatus, the Banger World Series resumed for Round three, and a second visit to Foxhall Stadium. It was well attended given the restrictions in place, and a double-header with the resumption of the National Hot Rod English Points series made it a tantalising prospect.

The National Banger world qualifying protocol had resumed two weeks prior with a behind-closed-doors meeting at the Aldershot Raceway, which also marked the first live streaming on the Spedeworth TV platform. On that occasion the National Bangers started off with two nudge-and-spin events, followed by a World Final wildcard. This was to ensure that the drivers who had had to pay the inflated entry fee (to counter-act the loss of money Spedeworth would have got through spectators) were able to at least get a couple of races out of their cars.

However, for this meeting, we were back to the standard BWS format, one heat per driver, the three-a-breast clutch start all-comers known as ‘The Showdown’ and then the all-in Wildcard Final.

The Kesgrave weather, despite coming back in the middle of the summer, decided it would be right for the return of the BWS to be beset by intermittent torrential downpours. During the warm-up and practice for the other formula on the cards, former National Hot Rod World Champion Billy Wood was caught out and put his newly shelled-out car into the barriers. However, damage was minimal, and he managed to race in the meeting.
​
There were some great cars on display in the Banger pits, including 360 Jack Reynolds in a fresh Scorpio Limo, and he was joined in that regard by a man who has been very keen to entertain this season, 162 Brent ‘Viking’ Shaw. The Bears mainly turned up in used Mercedes, but significantly bucking that trend was 266 ‘Odd Job’ Callum Hall who turned up in a used but strong looking Yank. Most notably, however, was the TGB man, 180 ‘Sparky’ Mark Foster and his Lincoln Town Limo – when a driver turns up in a car like that, the anticipation will always be for the big T-bone – and boy, did he deliver – more on that later.

​Heat 1 was contested by half of the 80-ish booked in drivers, and on the slippery surface most were playing it cautiously early on. 625 Josh Gooch took the worst of the hits, being set about on turn three. He was put on the back straight first of all and hit a couple of times by the traffic before 222 Matty High was pushed out wide, collecting Gooch. A few laps later, 162 ‘Viking’ tried to spin High – who managed to steer out of it – leaving the Scorpio Limo man nowhere to go apart from Gooch’s Scorpio Saloon. But it was 328 Ben Nichols, a young man not long out of Junior Bangers, who continued his amazing form in the National Bangers by taking a convincing victory.Heat 2 was contested by the other half, and pretty much straight off the rolling lap and the first corner surge, 180 Mark Foster found himself followed in. His car lay at an angle across turns one and two, however with this being a heat race with bigger things to come, the following pack took some very slippery avoiding action either side. As this was happening, an early Red Flag was called for the stricken car of the Team Black painted 384 John Golden Volvo 240 Saloon, who was followed in by 521 ‘Ace-Ash’ Ashley Riley on turn three. After a few minutes to let him get his breath back, the driver was able to exit the car under his own power, to the applause of the Kent Cams bend.

It was a complete restart as the reds were called with less than three laps completed, and from the start of the race 382 ‘Chubby’ Jack Foster Jnr took a decent lead from the chasing pack from 124, the 2018 Unlimited World Champion Carl ‘Oris’ Korszewski followed by 2019 Trackstar gold-top 570 Jordan Cumming. As the front three stormed off ahead, 416 Josh Spokes took a huge jacking from 294 Lee Hughes with 623 ‘Tricky’ Ricky Hutton following up after. There was a small amount of confusion as the chequered flag dropped on the second and third place battle, but a quick check of lap scoring confirmed that indeed, 382 Jack Foster Jnr was the winner.

A big change to the Banger World series this season is the moving of the Showdown to before the wildcard race. In previous seasons, due to the prize of the wildcard, it had seen drivers loading up after that being the first of the two ‘all-comers’ races, however this season it is now the second of the races for all drivers, and you are now expected to take part in order to race wildcard final. On a track as fast and as slippery as Ipswich on this Saturday night, a three-a-breast clutch start with 69 cars entering was always going to equal some mayhem.

And so it was, as the starter Mark Ayers waved the green, a huge surge went into the first corner. As the cars went flying in theee-wide, 717 Jack Tuffen (a man already seeded for the 2020 World Final) took some of the worst of it. In the carnage, a wheel was ripped off and the red flags were called with under a lap raced, so the remaining 61 cars lined back up, three-wide for the restart.
​
Attempt number two for the Showdown saw a fantastic start for former World Champion, and a man on most peoples G.O.A.T. lists, 617 Jack Overy take a decent lead. However, in the surge behind him, another wheel was ripped off one of the chasing packs cars, and as 266 ‘Odd Job’ and 349 Lewis ‘Noddy’ Price put in huge hits on the first turn, we had another red flag.
​
Once again, the cars were lined up for the third restart of the Showdown. 27 Dale Hughes took an early lead, but with about a quarter of the track between him and second placed man, 455 Ricki Finney, just as the Union Flag came out to signal the halfway point, Hughes put his car straight into the back of 360 ‘Jackstar’ Reynolds’s frogeye limo, sacrificing a commanding lead for the entertainment of the crowd. This allowed the Mercedes Estate of Finney, a man that was in tasting distance of biggest prize of all in 2017, to take the win of the Showdown.

The wildcard race reverted back to the two-a-breast rolling start, the winner of the race being assured of their place on the next Unlimited National Banger World Final grid. A steady start in the opening laps then transitioned into a coming together of some of the most spectacular cars on the grid, as coming out of turn two, 360 ‘Jackstar’ planted himself beautifully through the rear of 162 ‘Viking’ Brent Shaw, and as he came to a halt on the start of the back straight, 180 ‘Sparky’ followed up from where Reynolds left off. As ‘Sparky’ made the hit, the bonnet of his Lincoln Limo was left on the racing line, and red flags had to be called for. As Foster was not the cause of stoppage through his own fault, he could re-join the race from the back of the rolling pack.

As the green flag dropped on the restart of the wildcard race, 876 Ronnie Hammond jacked up Predators man 178 Kieran Bowman on the exit of turn two. The two Yanks of 266 ‘Odd Job’ and ‘Sparky’ met over to turn four with the Bears man crashing into the back of the Limo. ‘Odd Job’ then turned it around to deliver T-Bone through the side of 528 Jethro’s Toyota Supra. With the race settled down, 124 ‘Oris’ led from 570 Jordan Cumming, which stayed that way until the chequered flag. With the cars still racing through to claim the minor positions, we were treated to the hit of the night. 180 ‘Sparky’ having dragged his Lincoln Limo round to turn four, left it in an inviting position for someone to deliver a T-Bone. The man that obliged was Barton Boy 211 Jamie Pole, a man who is quickly making himself a reputation for the spectacular. He planted his Mercedes Saloon straight through the side of Sparky’s car, to the roar of the fans watching from the Kent Cams turn. As the reds were waved to end the race, there were smiles and handshakes all round, both drivers pleased with the show they had just put on.

When all was said and done, 124 Carl ‘Oris’ Korszewski joined 617 Jack Overy, 699 Stacey Holdsworth and 717 Jack Tuffen, along with current World Champion 327 Micky Maskell Jnr, on the list of drivers already qualified for the 2020 World Final. With sporting gatherings still in flux, lets hope we will get to see it, because so far, its shaping up to be a great season for the National Bangers, even with the four months we were all forced to miss!

Overall, it has to be said what a really good meeting it was, and it was great to see a crowd in attendance too enjoying the action, despite the rather poor weather. It has to be said though, the weather probably helped level out the playing field a bit and also act as a bit of a catalyst for the action that unfolded throughout the night. The National Hot Rods were also very good all night long on their first appearance since early November, apart from the practice days. The pick of the action saw former European Champion 174 Jason Kew win the final after a great battle with 629 John Sibbald and 95 Gavin Murray, in a 15-lap battle between a Yellow, Blue and Red top.
​
Round four of the BWS will see the annual pilgrimage to the Northampton Shaleway on Saturday 22nd August. Last running of this meeting saw Saloon Stock Car star 161 Billy Smith take the wildcard there last year in what was a very lively and chaotic final.