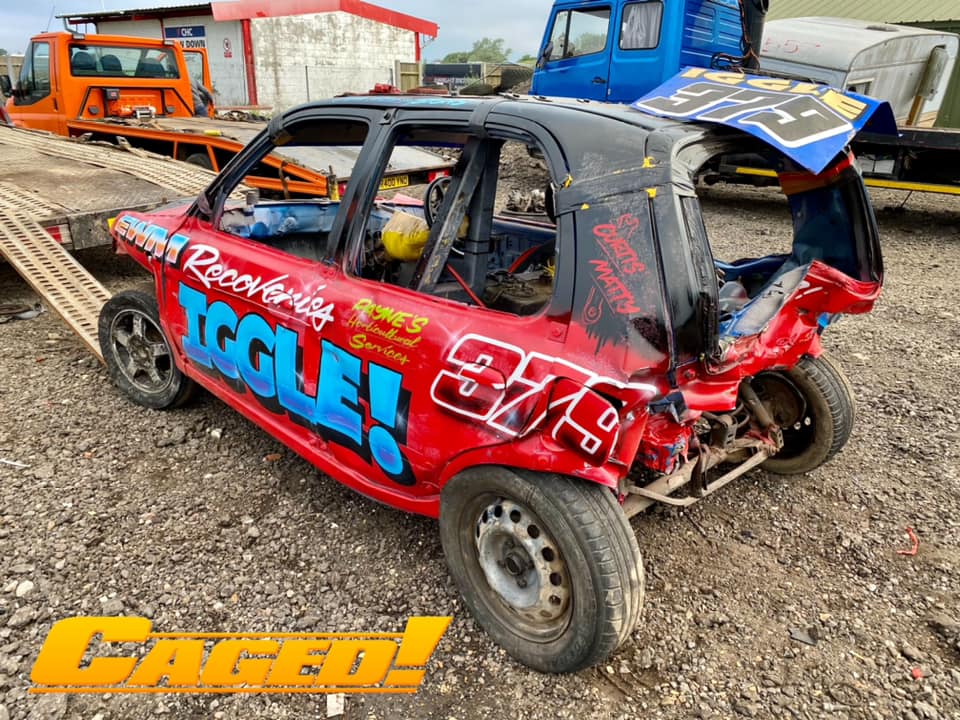 The Aaron King Memorial returned to Yarmouth Stadium on Sunday 30th May after a brief hiatus, having featured yearly between 2014 and 2016. A respectable 40 bangers attended including several long distance travellers from the North West and the Rowell brothers from the South who had already competed at Kings Lynn the night previous. Several drivers made the effort on the paint from including 448 Jay Byram, Fat Boyz pairing 166 Andy Armstrong and 623 Matty Mcfarlane and 379 Brandon Kevern. Damage Inc brothers 547 Ryan and 548 Alex Utting turned heads with their Mk6 Ford Fiestas.

Heat 1 begun with 131 McCarthy spinning 47 Jonboi from the off, which allowed 411 Rizzo to nail Jonboi with a head on. 29 Mawdsley was launched at the end of the home straight, which saw the long distance visitor meet a post, snapping it in half bringing the race to an early halt, but not before 217 Burrows homed in for a jacking to the former. After the repair work was finished, the race got underway again with 217 Burrows setting the tone rolling once more, pushing 516 Gouldy onto the infield tyres. 512 Rowe attacked 224 Canham for second place, which saw the latter catch a marker tyres and roll spectacularly landing back on his wheels under the starters’ rostrum. The race quietened down in the final stages, but 131 Harley McCarthy raced to the win, setting his authority by besting 512 Kieran Rowe by over a straight – 634 Ben Green taking third place. 423 Oliver ended the action by setting about 518 Gould.
131, 512, 634, 621, 276, 141, 277, 730, 217, NOF

On the award front, our friends at Northern Bangers put 2x £100 prizes up for meeting entertainer and hardest trier which were two aspects of bangers Weeman thought echoed what racing is about. 29 David Mawdsley’s never give up attitude coupled with the fact all his repairs were done the ‘old school way’ of a trolley jack and sledge hammer saw him take the hardest trier award and 548 Alex Utting’s use of the Fiesta front bumper throughout the night saw him take the entertainer award, but all drivers put on a show making it very difficult for the panel decide on the award.