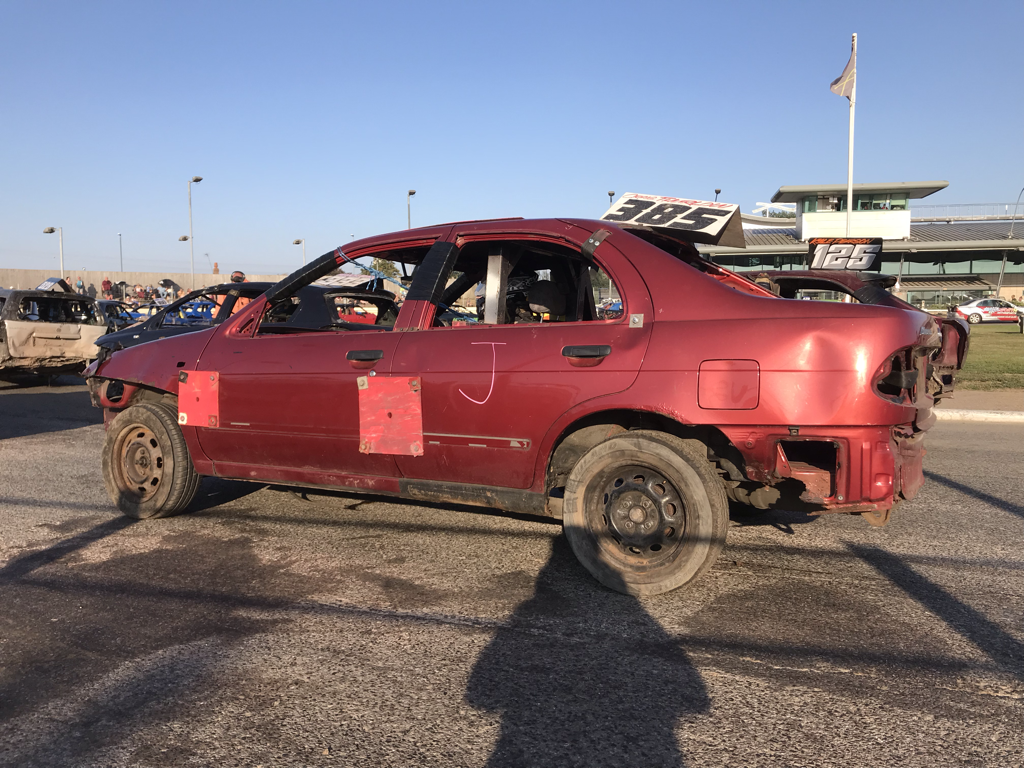 The Bank Holiday Sunday fixture at Yarmouth on Sunday 25th August saw a banger double header as the Junior Bangers and Spedeworth 1600 Bangers were on the bill, the latter seeing plenty of travelling drivers from the South Coast for a World Qualifying Round which raised 29 cars.

The Junior Bangers were out first for their Heat 1. 842 Mini Messer jumped up the back of 117 Rennie as he looked to pass. 117 Rennie recovered to spin 94 Anscombe. 5 Maddox had a nibble at 555 Gelly. 585 Holdsworth spun 449, who was then turned fence-wards by 94 Anscombe – the latter was then taken out on the caister bend. 5 Maddox had a pop at 622 Harvey and then continued his charge by spinning 117 Rennie on the caister bend to conclude the action as 131 Harley McCarthy picked up where he left of from the last Yarmouth session with another race win.
131, 999, 608

Heat 2 for the Junior Bangers commenced with 5 Maddox spinning 842 Mini Messer into the marker tyres exiting the caister bend. 08 Finlay spun on the pits bend. 94 Anscombe attacked 5 Maddox with the latter coming back with an attack on his own spinning the young Dreamer. 131 McCarthy spun 999 Cotty Jnr after the latter had held of the spin for a lap. 585 Holdsworth spun 5 Maddox whilst 555 Harry Gelsthorp raced to the win ahead of 608 Lenny Murkin and 131 Harley McCarthy.
555, 608, 131

A slight break up to the racing saw the return of the Ramp Rollover competition to the track with a new and improved ramp which was actually quite vicious producing some huge airtime and spectacular rolls. 499 Ashley Emms took the victory ahead of 409 Sarah Taylor; the latter doing a complete nose to tail set of rollovers.

The Junior Bangers Final was next up and saw 5 Maddox spin 555 Gelly early on and then jumped up the back of 117 Rennie as he attacked him also. 622 Harvey had a pop at 449. 999 Cotty Jnr spun newcomer 102 which caused 131 McCarthy to run head on into 102 ending both of their races. 585 Holdsworth spun 555 Gelly as 999 Louie Cottrill won but was duly docked two places for spinning a novice driver so 608 Lenny Murkin inherited the win from 5 Jack Maddox and the aforementioned 999 Cotty Jnr Jnr.