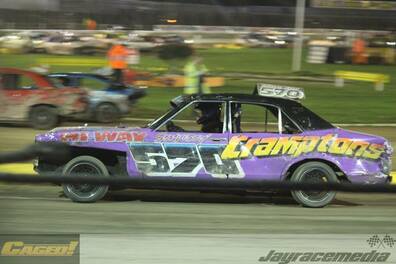 After a winter of quiet at Foxhall, the National Bangers returned for their first appearance since last year’s world final.
Much like last year it was a BWS Round that brought the National circus of HIABs to town. This year it was the second round of the series rather than the first, as the Aldershot running of the event was pulled forward from its usual slot.
I had already seen from the forums that the Aldershot BWS round had not lived up to many race fans expectations, but I was hopeful that my local track may be able to put on a better show. With the new entertainers league running this year I was quietly optimistic that this meeting would be one to remember, with it playing an important part in the night’s proceedings. The track was also set to be very busy with around 110 cars racing over the course of the night.
It’s safe to say that it certainly would be a memorable night for the sport, but for far more controversial reasons that I could have ever expected. Most people reading this will probably know why already.

HEAT 1
Lots of big names came out for the first heat. 570 Jordan Cumming was out in his used World Final MK1 Granada. 455 Ricki Finney was also out in his World final MK2 Granada, with 186 Sophie Facey in her 2-door Mk2 out as well. I must admit, I also took a personal liking for Charlie King’s Supra. Despite being used last time out at Aldershot, the car still looked mint and really stood out from the pack, being only one of two Supras in attendance.
As for fresh cars, 415 Scott Cornish stole the show with a stunningly painted Scorpio along with 757 Callum Gill. Lots of fresh Mercs were also out in this one as I counted over eight in the lineup.
As the race got underway 455 Finney and 717 Jack Tuffen led them away, with Tuffen on the inside. Despite this advantage, Finney was the driver who took the early lead, sweeping around Tuffen’s outside as they hurtled through the first turns. 570 Dino Jnr followed them up in third.
Things quickly got chaotic with a pile up around three or four cars forming due to the amount of people trying to get through at once. 194 Cecil was one of the early casualties here, in what was to really set the tone for Anscombe boys. Proceedings quickly came to a halt as a red flag for 721 Daniel Clarke was called.
At the restart, Dino Jnr was the man on the move taking up the lead. The other top brass in the heat were not going to let him pull ahead though, as 27 Dale Hughes, 617 Jack Overy, 455 Finney and 204 Charlie Boy were all in close pursuit.
Spinners throughout the mid-pack between turns three and four would soon scupper the chase for the lead, as Dino Jnr carefully weaved through the chaos, making his Granada dance across the track in the process. Many of his chasers stayed wide to avoid the carnage, but 204 Charlie King was to be the unlucky one as he hit the stranded 115 car of James Martin head on as he tried to take advantage on the inside.
As 570 came onto his last lap, 753 Billy Cunningham did his best to be an obstacle for leader, however Dino Jnr dispatched him with a spin on turn one. Gypsy Boy was then savagely T-Boned for his troubles by another passer, quickly putting an end to his evening.
570 took the flag in what was a rather easy run for him. Former Champ 27 followed him home for second place position, just pipping 455 Finney who took third.
Top 10 finishers: 1st – 570 Jordan Cumming (used Mk1 Granada)  2nd – 27 Dale Hughes (used Scorpio)  3rd – 455 Ricki Finney (used Mk2 Granada)  4th – 717 Jack Tuffen (used Scorpio Estate)  5th – 17 Kyle Overy (used Scorpio Estate)  6th – 617 Jack Overy  (used Scorpio)  7th – 247 Lee Clarke  (used Mercedes W210)  8th – 124 Carl Korszewski (used Mercedes W210)  9th – 57 Stuart Cumming (used Mercedes W210)  10th – 204 Charlie King (used Supra)

HEAT 2
The second unlimited race of the night looked to have a lot of potential with both the Barton Boys and the D.W.O out on track. In regards to cars on track, 89 Joe Barrett had brought along superbly Billy Bond’s Mk1 Granada Coupe from last year’s world final race, obviously in much worse state now than when we first saw it. Much like Sophie Facey in the last race 267 James Steel brought out his still gleaming 2-Door Granada from World Final night and  384 John Golden also had a good motor to hand, as he brought along his Jaguar XJ that he used at the Final Firecracker.
The rolling start saw 11 Ryan Leeks on the outside and 228 Sam Beasley on the inside lead the field away. Unlike the last race, it was the driver on the inside getting away better as Leeks missed the start completely and was easily jumped by Beasley and several others.
Once again chaos ensued at turns three and four as 341 Jonesy ran 328 Dan Lathan into the Armco at full chat, snapping the front left corner of his car and putting him out for the rest of the night. Midnight runner Joey Palmer also took an early spin at the exit of turn four, but managed to steer clear of oncoming traffic and get back in the race.
After the early flourishes, the race calmed down and became a somewhat muted affair with the main highlight being a few spins causing 257 Timmy Aldridge to be stranded on the back straight and 28 Fred James at the entry of turn three.
At the front, 228 Beasley had a massive lead, but on the last lap, he faced his first real challenge as car 4 driven by David Wilde forced him onto the shale. Beasley kept a cool head and calmly dispatched him at turn three before taking the chequered flag.
As the chequers flew on the home straight, a chain reaction of chaos unfolded around the stranded 28 car. The fresh Jaguar S-Type by 211 Jamie Pole was spun sideways, clipping the stationary Scorpio on the inside. As Pole rejoined the race, he then slammed into John Golden who just about managed to hold it together. To finish off the melee one of the TMT drivers came storming in and gave the Fred James car a healthy hit, but nothing terminal.
Top 10 finishers: 1st – 228 Sam Beasley (used Mercedes W210)  2nd – 456 Nathan Roberts (Scorpio)  3rd – 11 Ryan Leeks (Mercedes W202)  4th – 190 Steve Bailey (used Scorpio)  5th – 122 Mark Cooper (used Lexus IS)  6th – 162 Brett Ellacott (used Jag XJ S5)  7th – 114 Liam Lake (Mercedes W210)  8th – 75 Clive Haylett (used Mercedes W210)  9th – 673 Darren Fendley (Mercedes W210)  10th – 196 Joey Palmer (Scorpio Estate)

WILD CARD RACE
With the wild card draw keeping the two race winners at the front, it would be 570 Jordan Cumming leading the pack away for the big race.
Turn four once again proved to be the place to watch as 144 Richard Mackley piled into one of the Team Black drivers.
Somewhere in the chaos and sadly out of my eye line, 717 Tuffen made the move on 570 for the lead.
617 Overy was the man I had my eye on, as he’d made good early gains up the order and was very soon closing up on 570.
A red flag soon stopped proceedings as one of the World Final Granadas had taken a hefty hit on the home straight, snapping the front left corner. It took me a while to see who it was, but the gold colours gave it away as 267 James Steel.
The running order as the cars resumed after the red was 1st 717, 2nd 455, 3rd 907, 4th 348 & 5th 247.
As the race restarted, the melee on turn four resumed with 247 Bro getting caught out with a head on collision from another car. The Barton Boys were also heavily involved with 211 Jamie Pole once again acting as one of the main sources of action. A series of hits also saw 617 taken out of the race, bringing his fantastic performance to an abrupt end.
Another red flag period for the injured 180 Mark Foster stopped racing once again. 717 Tuffen still held the lead despite the close pursuit from 455 and 907.
The second restart was to also be short lived. 247 was lurking on opposite at turn four and out for revenge. As 190 Pikey came round the turn, he made his move. In what was the biggest hit of the night that I saw, Bro aimed for a head on, but snapped the front corner of Steve Bailey’s Scorpio so hard that it took all of his momentum away. Cars then piled in behind Pikey, shoving him onto the shale. Although he was off the raceway another red was called, which was then red and chequered when lap sheets were checked.
It was a rather muted win, by 717 Tuffen, but he drove a fantastic race and thoroughly deserved the win. He will be the second driver alongside 617 Overy to qualify from the series and with five more series rounds to go, there are still plenty more people who can join them.
Top 10 finishers: 1st – 717 Jack Tuffen  2nd – 455 Ricki Finney  3rd – 623 Ricky Hutton (used Mercedes W210)  4th – 17 Kyle Overy  5th – 204 Charlie King  6th – 341 Andrew Jones (Mercedes W210 Estate)  7th – 577 Alfie Lee (used Mercedes W210)  8th – 757 Callum Gill (Scorpio)  9th – 196 Joey Palmer  10th – 415 Scott Cornish (Scorpio)