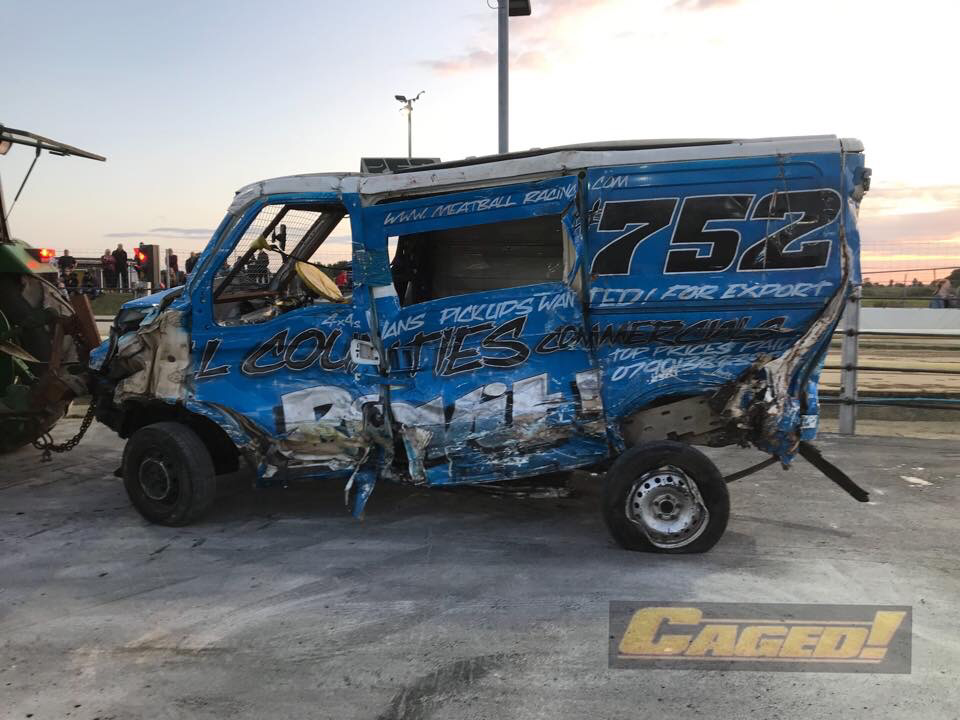 Sunday 18th August saw a double header at Yarmouth as the National Van Bangers had their annual outing raising 7 in total and they were supported by a late addition of Back To Basics Bangers which had been on fine form in the meetings leading up to the meeting; 29 cars in total assembling to the East Coast venue.

Back to Basics were back for Heat 2 and saw a complete restart after 1 lap as 512 Wishbone Jnr lost a wheel. The restart saw 515 have a nibble at 214 Rigby. 502 Selfy attacked 748 Ginge at the pit gate. 636 Planey spun 9 Titch who immediately recovered only to get spun by the former’s son, 336 Fathead. 112 Greatrex caught a post down the back straight ripping a wheel off; creating a big wreck for his Ford Puma in the process and resulting in another race pause. The race resumed with 748 Ginge attacking 629 Rout, the latter backing his attacker up into the ropes. 636 Planey got bounced off a post by the pack losing a wheel bringing yet another stoppage. The restart saw 21 Ballard spin 433 Smith. 995 Deano buried himself tangling with 14 Bazza. 19 Smiley Joe spun 433 Smith who was having a luckless race by all accounts. 14 Bazza spun 109 Posh Boy. 433 Smith recovered to attack 667. 469 Taylor expired due to running out of fuel, but luckily boyfriend 165 Benny managed to push her for over half a lap and fend off the onslaught of drivers behind for her to take the win.
469, 585, 629

Overall, both banger formulas combined for a great evening of entertainment for the holiday crowd.