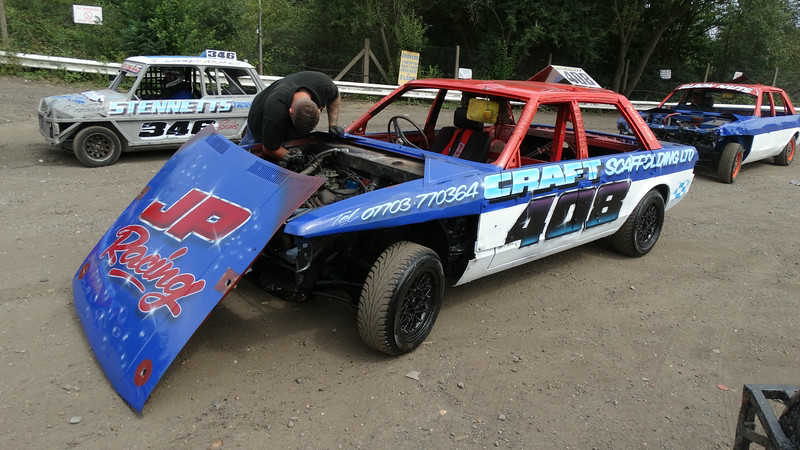 The Keeping It Real Series saw its invention for PRI’s 2014 season, mostly the brain child of Paul Whiteman in an effort to put Arena Essex back on the map after a few struggling seasons on the domestic front. There were 4 rounds for KIRS, with round three seeing the return of an All Mk1 & Mk2 Ford Granada meeting to the track, once again for the Maya Memorial raising around 50 cars including a mega showing of continental drivers with the vast majority coming from the Hammertime and Garbage contingents.

Heat 2 begun with 196 Palmer spinning 267 Steele, before taking in 1 Maai on the tavern bend. 777 Vorkink rattled in 23 Pearcie, before continuing on to set about 291 Turbo Turner. 592 Marchant ran in 1 Maai. 382 Hutchings spun 741 Daniels. 26 Muller took in 592 Marchant. 39 King snaked ahead of 717 Tuffen costing him the lead, which allowed 10 Lamp to take up the running. 362 Simons spun 23 Pearcie. 24 Devastator went flat out on oppo down the home straight in true Arena Essex, connecting with 20 Mr Cush on the tavern bend. This set up one of the best moments of the meeting, as 592 Marchant jacked 20 Mr Cush triggering a jacking train, as 382 Hutchings stormed into the TMT man. 267 Steele jacked 382 Hutchings delivering instant revenge for his TMT brethren. 623 Tricky then weighed in on 382 Hutchings, only to be done in turn by 362 Simons. 552 Blacknuts jacked 362 Simons, and received the same treatment from 23 Pearcie. 741 Daniels put the roof up on 382 Hutchings. 623 Tricky drove through 23 Pearcie, lining him up for a front wheel shot a lap later. 10 Paul Whiteman raced to the win, with 24 Mark de Laat taking the race entertainer award.

The Consolation saw 1 Maai attack 291 Turbo Turner from the drop of the green flag. 577 Fonzo went in on 1 Maai, before 190 Pikey followed 174 Sharrod in on turn 1 at an unreal rate of knots, well and truly snapping the latter’s Mk2. 239 Nemesis gave a head on to 262 Roona on the tavern bend. 196 Palmer turned around to weigh in on 262 Roona, before getting a run of speed and jacking the latter. 1 Maai jacked 239 Nemesis, as 196 Palmer delivered a flat out jacking to 262 Roona. 1 Maai completed a lap before administering a back wheel shot to 239 Nemesis. The leading 17 Chiefy spun himself, which handed the lead to 190 Pikey, but the DWO man had different intentions, turning the car straight around. 714 No Show took up the running. 242 Korps drove through 1 Maai who had become stranded along the back straight. 190 Pikey delivered a huge shot on 1 Maai. 714 Paul Smaldon won, with only 3 finishing the race.

The Final saw Consolation winner 714 No Show swipe 53 Palmer. the latter ending up pinballed along the home straight. 241 Korpiela turned 632 Reedy Jnr fence-wards down the home straight. 347 Bull delivered an oppo attack on 24 Devastator, with 623 Tricky ploughing through the RAL 6005 driver too. 227 Ooze Boy spun 267 Steele in a battle for third. 382 Chubby spun 39 King. 267 Steele delivered a rear wheel shot to 347 Bull as 49 Buff set about 632 Reedy Jnr along the home straight. 49 Buff shed a wheel leading to red and chequeres. 331 Jason Jackson taking his second win of the day, ahead of 227 Dale Hughes and 10 Paul Whiteman. 49 Billy King was deemed the race entertainer this time around.