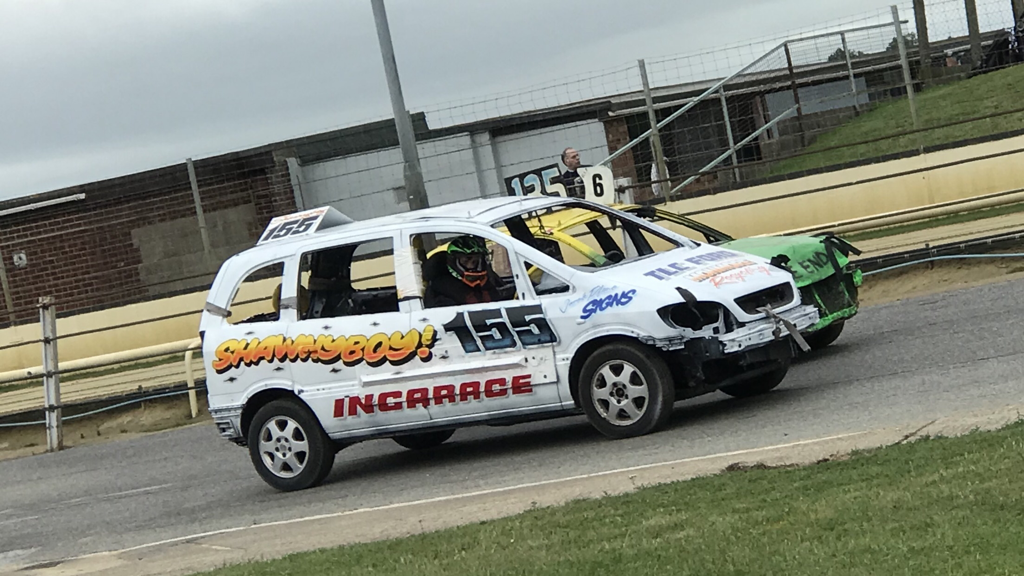 Around 50 Back To Basic Bangers assembled to Yarmouth Stadium on Sunday 28th July including the usual random array of cars. Scrapyard Screamer made the most of his holiday to the seaside destination with a very smartly presented Vauxhall Zafira from the rental scheme and 86 Alec Savage made a welcome return to Bangers after a lengthy absence in a used BMW 3 Series Estate previously used by 517 Dave Madgwick.

Heat 2 started with Yarmouth’s resident photographer and stat man 253 Utting attacking 251 Caines from the off with 7 Chunka going in on 253 Utting. 696 attacked 307 Parker. 420 Yoda had a go at 931 Gladden. 9 Titch spun 28 Mayo Maker. 7 Chunka jacked 420 Yoda. 950 had a go at 155 Leary. 135 Old Mann spun 253 Utting. 39 Pusher Paul spun 307 Parker, and at this point it was difficult to keep on top of the action. Squashies running mates 691 Turner and 28 Mayo Maker collide on the pits bend. 7 Chunka ran 253 Utting head on into 307 Parker which put an end to Utting’s night. 7 Chunka continued his lively display spinning 499 Crashley towards the fence at the end of the home straight. 86 Savo had a pop at 950. 7 Chunka jacked the lame 931 Gladden. 691 Turner caught 7 Chunka. 28 Mayo Maker spun 499 Crashley to round off the action. The initial win was awarded to 33 Magic who admitted he definitely wasn’t the winner after crashing out at various points and after a recap of events it was 9 Titch who was deemed the winner.

The Back To Basics return to action at the track on Wednesday 31st July to commence six weeks of Wednesday nights for the formula.