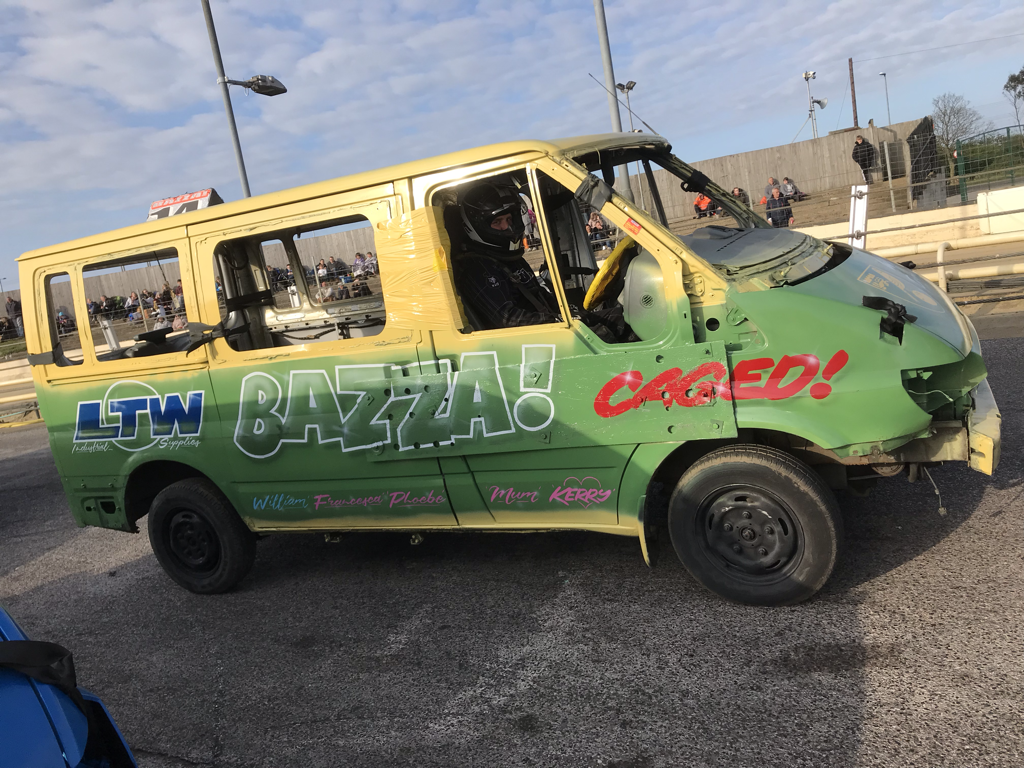 Sunday 5th May saw 19 Vans at Yarmouth for their maiden Back To Basics Vans session with a variety of material which was topped by 548 Alex Utting’s Nissan Sunny van.

Heat 1 for the Vans commenced with 175 Emmo spinning ban returnee 421 Hippo. 31 Manny Boy spun 28 Mayo Maker. 257 Yorkie Jnr who was doing his first meeting in 8 years, spun 109 Williams aside. 31 Manny Boy lost a wheel on the caister bend coming to a stop just before the starters rostrum. 28 Mayo Maker attacked the much larger Transit of 893 Huggins. 421 Hippo ran into 893 Huggins and was duly collected by 222 Norton. 839 Marc spun 512 Wishbone Jnr. 14 Bazza expired in front of the leading 33 Magic allowing 447 Nail to sneak back in front and they enjoyed a good battle before 33 Magic bested his way past. 109 Williams spun on the pits bend, as 421 Hippo spun 28 Mayo Maker. 512 Wishbone Jnr removed 314 Holdsworth to conclude the action. 33 Magic won in his very fast Fiat Doblo.

A race format change saw the Final next, which began with 893 Huggins getting buried by the pack on the pits bend; Huggins then delivered a reverse attack on the leading 31 Manny Boy. 439 Sutty overtook 31 Manny Boy for the lead as the latter got a puncture from his earlier attack. 14 Bazza expired again. 499 Crashley spun, with 109 Williams moving in to spin 499 Crashley in turn. 421 Hippo set about 893 Huggins. A few laps passed before 893 Huggins attacked 748 Georgieboy running him in to the pit gate. 439 Sutty spun 421 Hippo. 28 Mayo Maker caught alight in his Berlingo. 14 Bazza tamely ran in to back of 548 Big Al and then spun him on the pits bend. 31 Manny Boy buried 893 Huggins in a revenge shot. 33 Magic raced to the win although, was docked two places for a jump start meaning that 439 Sutty inherited the win ahead of 447 Nail and 33 Magic dropping to third.

Overall, a great session at the seaside venue for the Vans which adds promise for the fixture going forward.