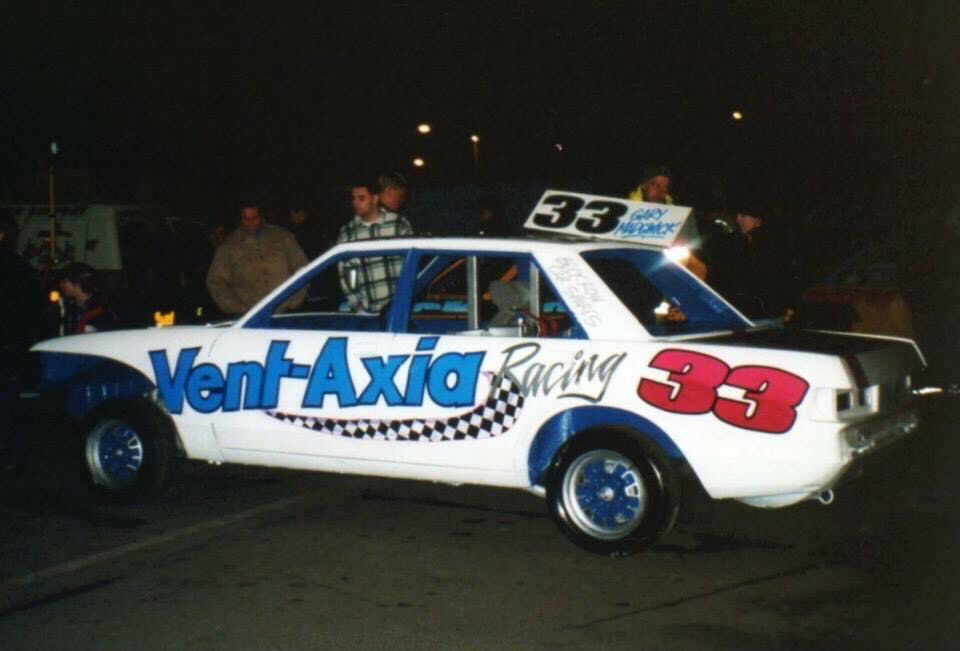 The biggest night of the year on the Banger calendar; the Spedeworth World Final took place at Wimbledon on Sunday 14th November for the 1999 staging of the event. Around 100 cars were in attendance at the Plough Lane venue, with drivers’ representing various promotions including seeded entries 53 Chris Crellin from the Isle of Mann and 259 Gert Roubroeks from Belgium. Plenty of drivers impressed on the paint front as typically expected, but the stand out motors saw 66 Mark Rogers with a tidy Toyota Custom Crown Coupe and 670 Richard ‘Tricky’ Flockton with a Mk2 Ford Granada Windsor Estate, both of which featured in the support races.

The Last Chance races were split into a half cars format, with the winner going through. It didn’t take long for the action to start with various spins occurring, before 202 Kilf went in on 233 Mr Magoo down the back straight in a tangle. 191 Druggie put 9 Wallace away on the pits bend, before 537 Bruno absolutely destroyed 369 Shepperd to bring the first stoppage of the evening. The restart saw early leader 314 Toolbox taken out of contention by 245 France. 510 King Basher put away Cream Team man 59 Greenstreet. The action rolled on with 295 Havoc and 39 Peanut having a coming together along the back straight. 202 Kilf’s hopes of qualifying took a blow as he crashed out of second place when he tangled with 285 Rose. The lively 510 King Basher set about 418 Hitman in a big way. Whilst all this was going on, 82 Winkle races to a convincing win, lapping the field in its entirety on route to booking himself a spot on the back of the grid for the main race.
82, 510, 245, 22, 314, 152, 202, 295, 126

The second last chance race began in lively fashion once again as 239 Smosha leant in 260 Moon, before two stonking hits went in on the pits bend. 05 Perez hung 226 Retard Roy off a post with a follow-in on the exit of the bend, as 101 The Cobbler thundered 331 Melons in, leaving the Old Gits driver well wrecked and The Cobbler’s Volvo 240 Estate on its side bringing out an early stoppage. 25 Tombo set the action rolling on the restart by spinning aside 8 Wolfe. 3 Stevens followed in 130 Laney, before 37 Fizz put away 66 Rogers as the graveyard of cars on the pits bend became ever-growing. 8 Wolfe moved in to spin out 37 Fizz. 66 Rogers recovered from his earlier visit to the fence to administer a jacking to 153 Palmer. The former then came under some attention with 8 Wolfe homing in on the Custom Crown Coupe; 239 Smosha and 80 Matty also adding more abuse to Rogers. 183 Struddy spun the back marking 595 Cossey as he looked to close the gap on the leading 287 Gizmo. 568 All Blacks destroyed 239 Smosha, but was duly jacked in turn by 37 Fizz with both drivers heading onto the middle. 287 Gizmo managed to hold on for the win taking the final spot on the grid.
287, 183, 320, 670, 62, 595

The usual festivities sparked the build-up to the World Final, with defending champion 7 Colin Farley leading out the entrants for the live grid draw, which was assisted by Patsy Palmer (Eastenders Bianca.) It was Scotsman 760 John Mason that drew pole, with RDC’s 22 Dave Vincent filling out the front row. Defending champion 7 Wally was back in 41st on the grid. 627 Cokey had issues whilst the grid draw took place so his position was not announced.

The follow-up race to the World Final was often just as highly anticipated as the title race itself. This staging of the Alcomers certainly delivered the goods. Motley Kees man 384 Goldie set the ball rolling with a follow in to 488 Murrell. This set off a triage of follow-ins, as 670 Tricky thundered in 307 Randell and 320 Duell did the same to 3 Stevens. 287 Gizmo was on hand to tbone 670 Tricky. 732 Bryant buried 384 Goldie as the pits bend began to form a pile up with loads of drivers steaming in. 147 Davies tboned 202 Kilf. 332 Reedy was the next to show as he dispatched of 295 Havoc. The fast charging 332 Reedy then caught 33 Magic and spun him to take up the running. 384 Goldie then spun it around to stop 66 Rogers on oppo, whom received further punishment courtesy of a jacking from 314 Toolbox. 6 Holdsworth homed in with a shot to 700 Marco. 66 Rogers then went on oppo delivering an attack to 374. The leading 332 Reedy was stopped courtesy of a head on from the lively 66 Rogers, which allowed 33 Magic to sweep in and dispatch the former on the last lap to take the win. Reedy recovered for second, with 314 Toolbox rounding off the top three. 6 Holdsworth concluded the action with a tbone to 66 Rogers.
33, 332, 314, 382, 245, 6

The DD rounded off the evenings’ action and begun with 285 Rose delivering a follow in to 369. 326 Picton delivered a shot to 17 Captain Caveman. 568 All Blacks ended 33 Magic’s hopes of securing an Alcomers and DD double with a solid head on. 199 Powell had a lively spell delivering a shot on 53 Crellin before going on to jack 264 Wellard, the latter coming under further abuse courtesy of a head on from 17 Captain Caveman. 285 Rose administered a head on to 199 Powell. Autospeed man 382 Hunt made a beeline for Trackstar driver 537 Bruno with a tbone before homing in with multiple shots but this only freed the latter from the pile up. 382 Hunt then continued his assault on 537 Bruno, going on to give a head on to the latter before 285 Rose eventually made his way round from the back straight to deliver a reverse attack to Hunt. This saw both cars expire leaving 537 Martin Brunson to take the win in a night where Trackstar took most of the spoils.