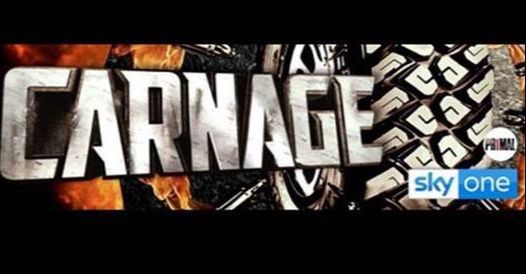 Sky One are the host of a brand new motoring show that is billed as “the most extreme contest on the planet!” The show is a mixture of Top Gear and Robot Wars set in an African Desert, resembling that of the scenes in ‘Mad Max’.  Before the shows first episode airs this Sunday, I was lucky enough to ask Pete ‘Bodja’ Osborne a few questions about his time filming the series.

So without giving too much away, what was it like on the set?
Bodja: “On set was pretty cool, there was no expense spared, and as you will find out when it’s showed on tv, there was a hell of a lot of attention to detail! The guys that built the arenas were there for 6 months putting it all together before we turned up. It was also filmed in HD too so along with the set there was also a hell of a lot of camera equipment, we also had air cannons being shot at us and flame throwers so it was pretty intense!”

The show was filmed in Africa, in a ‘Mad Max’ style environment, how did you find it?
Bodja: “It literally was! That’s no lie and it’s not all hotels and parties… we were in the middle of the South African desert on the Eastern/Western cape border about 5 hours north of Cape Town. The nearest town with civilisation was 2 hours away, so we stayed in tents with cold showers at night and cracked on in temps that reached 48 degrees through the day! As bleak as it was, there was about 400 people there with us and crew, African and English, film crew, caterers, cleaners you name it, a pop-up town appeared for 3 weeks in the middle of nowhere!”

Obviously, you’re well known in the Banger community for being an entertainer and not afraid to crash, I guess the show fitted you well?
Bodja: “Yeah of course! It was pretty dog eat dog to be fair and we had all put so much into it that no one wanted to get knocked out early! I can guarantee that everything you see of the ‘battles’ on tv is real, it was pretty much green flags and fight to the death! Right up my street! We weren’t the only banger racing background guys there though, along with us, Kevin Welch “the arm” and Alan Cartwright “Winnie” also had teams out there so it was great for us to get out there and recognise some faces!”

So, on that subject, how did you get involved with the show?
Bodja: “Quite randomly actually, the casting team from the production company were here at banger meetings last year and approached us about it at Ipswich Spedeweekend last year!”

Did you have any input in the design of the cars or the armouring of them?
Bodja: “We built our car ourselves! Every team got an allocated budget from Sky, and 6 weeks to buy a road going MOT’d car. It then got sent to a company that put the cage and seat etc in it, then we were let loose to weaponise it and armour it with close scrutiny from the technical guys! Ours is in a bit of a wedge shape with the intention of attacking wheels and getting under people, we didn’t want to mess about with hydraulic or air powered flipping stuff on the nose we just built it all solid like a stock car, I think 16 lengths of box went in to it! We also had self-writing rams either side and a hydraulic spinning flail on the back!”

The main aim of the show is to destroy the oppositions vehicles, so just how similar was it to a Destruction Derby that we see in Bangers?
Bodja: “It was similar to a DD back here at home in certain ways, as you can imagine health and safety was top, so no drivers side up shots etc, and like I said before it was real and everyone wanted to win so it was a case of using your head and having a bit of a game plan, some rounds 3 went in and 2 came out so it was simply blitz the underdog! Bit like a DD I guess, start with the weak ones first!”

Finally, what were the three celebrity presenters like and did you talk to them about Bangers?
Bodja: “The presenters were decent and down to earth, we had Freddie Flintoff, Lethal Bizzle and Vick Hope off Capital FM, they were cool to get on with and talked to Freddie about racing, he had a little crack in a banger last year at Arena for ‘A League Of Their Own’ (well he thinks he had a good go anyway)! You can see how we got on with them and how we got on with the competition as of this coming Sunday on Sky One and Now TV at 8pm!”

Thanks to Pete for answering the questions and giving us an insight into the world of ‘Carnage’ which starts this Sunday at 8pm on Sky One! You can go and give the Team NFG page a like on Facebook by clicking the link here: https://www.facebook.com/carnageNFG/