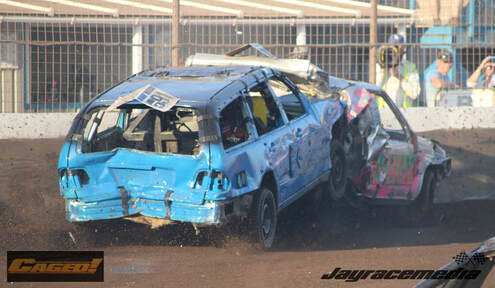 Trackstar Racing’s impressive start to 2019 continued on a pleasantly warm Easter Saturday with the Unlimited Bangers White and Yellow Series Final and the 2019 running of the East Anglian Championship.
The 2Ltr National Saloon Stock Cars were also in action and contested their 2019 25 & Unders Championship of Great Britain.
The 1300cc Stock Cars completed the bill with a fantastic booking list that was fully booked a couple of weeks before the meeting.

​Unlimited Bangers
Around 90 Unlimited Bangers helped fill out the Adrian Flux arena pits with some nicely presented cars on show – including those of 51 James Licquorice, 100 Callum White, 307 Martin Kent, 388 Taylor Sowter and 757 Callum Gill. Meanwhile, 211 Dennis Vorkink was making the most of the long weekend and piloted a tidy Volvo 240 Estate whilst his fellow Dutchman 523 Kevin Oonk had a used MK3 Ford Granada.

The opening race of the night was the 2018 White & Yellow Series Final, which also doubled up as Heat one of the evening with just under 40 cars out on track.
A chaotic start followed with 883 Jack Filmer getting spun on the home straight and hit hard over the rear left wheel. 883 Filmer then turned it round on the exit of turn four and was hit hard through his passenger doors.
Filmer’s teammate 388 ‘Lump’ also turned it around and met 321 Andy Newton’s LS400 on the nose. 229 Dean Jarvis was pushed into the back of 321 Newton by 11 Ryan Leeks.
883 Filmer then met 51 Licquorice on the nose with 87 Damien Matthews also pilling into the back of Licquorices’ Jaguar.
396 Callum Woods followed in 721 Dan Clarke on turn’s three and four whilst 349 ‘Noddy’ Lewis Price hit 229 Jarvis on opposite through the passenger doors.
On the home straight the action continued with 558 Donald Stewart getting jacked by 178 Kieran Bowman who was subsequently jacked by 288 Carl Sowter.
329 Michael Carter came through to win with a great drive.

The second heat of the night raised a similar number of cars but started a lot more quietly than the first heat.
211 Vorkink was spun towards the armco on the exit of turn four by 589 Simon Smith and met on the nose by 428 Michael Jones.
Vorkink managed to get going again leaving Jones’ Volvo Estate sitting vulnerable on the exit of turn four. 591 Jack Giddings obliged by nailing 428 Jones with a tremendous shot leaving the latter’s car well wrecked.
Meanwhile, the other Dutch visitor 523 Oonk was jacked by the 2Ltr World Champion 247 ‘Bro’ Lee Clarke on turn two wrecking his MK3 Granada and ending his night.
100 Karl Toole came through to take victory after taking the race lead early on.

The third heat of the night raised another strong field of cars and was probably the Bangers’ liveliest race of the night.
The Gladiators were causing mayhem on turn four with 349 ‘Noddy’ and 201 Phil ‘Turkish’ Milner on opposite.
‘Noddy’ met ‘Mossop’ 419 Laura Quadling on the nose with a head on with 174 ‘Whipper’ Dave Osborne jacking ‘Mossop.’
‘Noddy’ was then hit over the rear left wheel by 211 Vorkink, killing the Gladiator man’s Toyota Previa.
‘Turkish’ met 128 ‘Shippy’ Andrew Shipp with a head on, on the exit of turn four with 214 Conner Osborne hitting the rear end of Shipp’s Jaguar in his big Lincoln Town car.
A small pile up formed which saw 211 Vorkink get t-bonned by 214 Osborne. Vorkink came out of the pile up on opposite before turning his Volvo Estate back around and delivering a revenge shot to Osborne over the rear right corner of his Limo.
The action was coming thick and fast on turn four, even race leader 51 Licquorice got involved, hitting 388 ‘Lump’ over the rear left corner.
51 Licquorice managed to come through the carnage on turn four to grab the race win.

The fourth heat was probably the quietest heat race of the night with some fast and frantic racing going on throughout the field.
661 Shaun Smith was spun on the home straight and nailed by 542 Craig Oliver, who pushed Smith all the way into turn one before un-tangling himself.
67 ‘Sparky’ Mark Whittaker was flying and came through to win.

The 2019 East Anglian Championship was the last race of the night and was open to all available cars – raising around 50.
The racing was once again fast and frantic with 87 Damian Matthews taking the title after 299 Tom Callaghan with a few laps to go.
On the action front, there was little to be had – the only real action was 247 ‘Bro’ meeting 791 Nicky ‘Spud’ Young on the nose on two before subsequently getting jacked himself, snapping his already used Rover P5.
The green flag was waved straight after the Final and started with 542 Oliver jacking 211 Vorkink before spinning him towards the armco on the exit of turn four.
589 Smith picked up 178 Bowman on the back straight and followed him in on turn three, with Bowman rolling on impact.
Just as the red flags came out there was a quick succession of hits on turn four with 51 Licquorice giving 211 Vorkink a head on before getting jacked by 589 Smith before the new East Anglian Champion 87 Matthews jacked him.
The restart saw around three or four cars left running all looking for that last hit.
388 ‘Lump’ had broken steering and was struggling to get going. He eventually did and joined in the action on turn two. He was jacked by 699 Aaron Nelson who was declared the winner ending a brilliant night of hard and fast Unlimited Banger action.
​
National Saloon Stock Cars:
Just a week before the National Saloon Stock Cars competed for their English Championship at the same venue, the Under 25’s competed for their Championship of Great Britain.
Number 12 Sam Bloomfield spun just as the green flag dropped allowing 389 Ryan Santry and 172 Jack Rust to lead the field away.
The pair battled it out for the first few laps going side-by-side around the whole track, until 172 Rust got the better of 389 Santry.
306 Daniel Parker was carving his way through the field, overtaking local lad 391 Jake Banwell in the final few stages to grab second.
Unfortunately for Parker, 172 Rust was too far out in front with the man from Norwich claiming victory and the 2019 25 & Under Championship of Great Britain. 306 Parker was second with 391 Banwell third.
The second race of the night for the Saloon Stock Cars was their first heat race of the night.
777 Alan Ainslie was spun on the exit of turn four early on which caught out a few of the star graders including the UK Open Champion Michael Allard.
399 Cole Atkins was a man on a mission and took the race lead at around the half way mark.
Atkins was looking comfortable out in front until the yellow flags were brought out late. This saw the big lead he’d built up diminished.
With just a lap to go on the restart, 570 Simon Venni pushed Atkins wide on turn’s one and two taking the chequered flag with Atkins managing to hold off 26 Tommy Barnes for third.

The second heat saw the yellow flags brought out early on after 450 Luke Jackson was spun on two. Number 19 Darren Mansi also spun on turn four.
The restart saw 131 Timmy Barnes continue to make progress through the field, eventually overtaking race leader 214 Tom Yould.
306 Parker had a great battle with 600 Barry Russell in the last few laps with the pair constantly trading places. It was the former World Champion however who managed to come home to finish second with Russell close behind in third.

​The Grand Final saw 131 Barnes show that same speed again to take the race lead after the yellow flag halted proceedings a few laps in after 697 Jordan Cassie rolled on turn one.
The battle for second saw 428 Lee Sampson move up the inside of 888 Shane Emerson at turn three whilst 306 Parker eventually got the better of 349 Michael Allard to come home fourth, spinning him out on turns three and four with just a couple of laps to go.
A week later, it was 730 Deane Mayes who clinched the 2019 English Championship to go with his British title.

The first race of the night for them was a White & Yellows heat race which also doubled up as heat one, and started with a bang when 92 Jeffrey Bell was pushed into the turn three armco, scrapping all the way along before eventually grinding to a halt by the start-finish line with flames spitting from the underside of the car.
There was also a big roll on the back straight for 276 Wally Walden with both incidents bringing out a red flag.
On the restart, 769 Ben Englestone grabbed the race lead, managing to hold on for the win from a hard-charging 760 Robert Spinks.

Heat two saw 561 Stephen Murphy lead the field away before the race was halted after 473 Dean Moat rolled on turn three.
Murphy got the hammer down at the restart, sliding his Toyota Starlet around the bends and cruising to a heat win.
42 Carl Morgan came home second after tussling with 142 Jack Lower. 144 Jordan Godfrey also got involved in the battle for second and finished third, just pipping 142 Lower in the closing stages.
The third heat saw 400 Kevin Shinn push 101 Jake Perry into the turn one and two armco with Perry nearly rolling on impact. The red flags were brought out to check on Perry’s well being after the heavy impact.
The restart saw 131 Callum Anderson race off in front whilst 731 Barry Wade got the better of 40 Jake Stringer-Adams coming out of turn four.
Meanwhile, former World Champion 333 Dan Weavers fought his way up to second with current National and World of Shale Champion 216 Dan Booth coming through to third from the back of the grid.

​The Grand Final saw 561 Murphy lead the early stages but was soon overtaken by 131 Anderson.
A caution period followed for some lose debris, but Anderson didn’t let that phase him and got a clean get away on the restart to claim a heat and final double, spinning out 367 Tom Keep on his way to the win.
561 Murphy struggled to keep 142 Lower and 144 Godfrey behind and eventually dropped down the order.

Overall, it was a great night of racing action across all three formulas with beautiful sunshine and warm weather for most of the night. Congratulations to 87 Damien Matthews and 172 Jack Rust on their respective title wins.