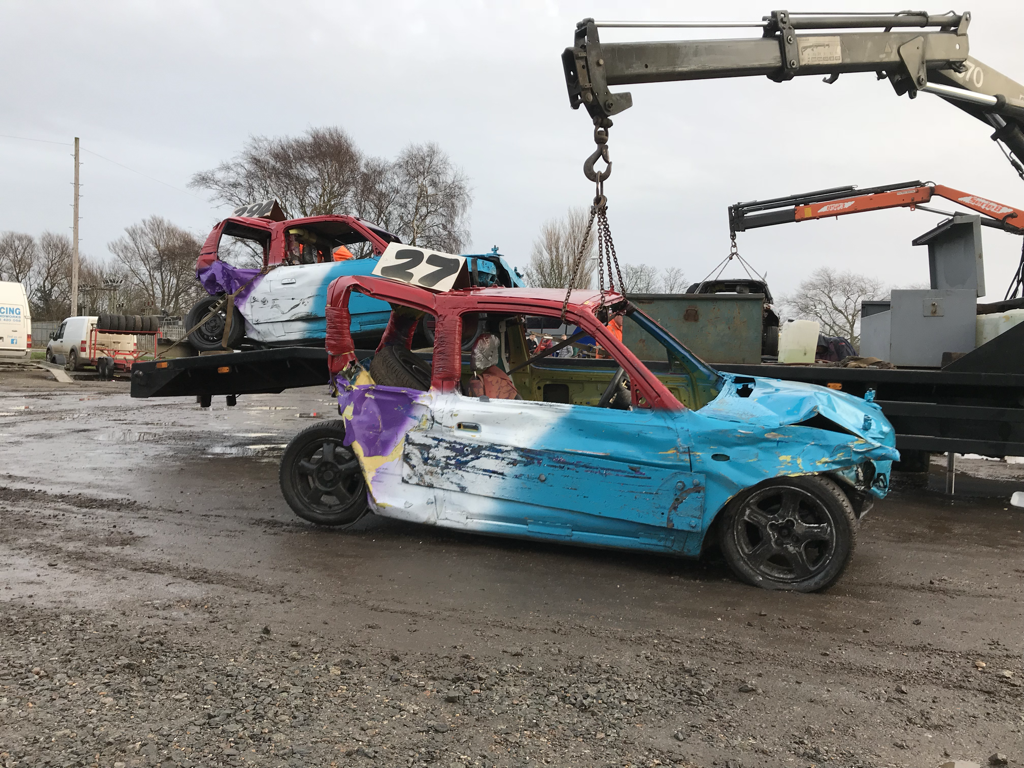 A fresh New Years Day saw 45 drivers flock to Yarmouth Stadium for the Micro National Banger Team Championship. The field was dominated by the typical Micro stuff; 17 Kyle Overy had a Toyota Starlet and 124 Oris dared to differ with a Citroen C2. A surprise was that there was only one Ford KA, which was used by 516 Gouldy. A few drivers impressed on the paint front, all of whom coming from the Midnight Runners teams.


Heat 1 raised a strong 43 cars. DI247 Bro was the first to show as he attacked rival MRA294 Stuntman, before going to on to bury MRA27 Ooze Boy flat out on the Caister bend. DI247 Bro continued his one man show as he spun MRD92 Morphey left. TL379 Iggle jacked MRA27 Ooze Boy before copping one in turn from the recovered MRD92 Morphey. MRE157 Domie ran WSM518 Stu through MRD92 Morphey. MRE570 Dino Jnr put in the leading LM447 Nail. MRB341 Jonesy delivered a head on to DI247 Bro, who was jacked in turn by MRB623 Tricky. TS284 Heady Jnr spun MRE305 Cornish before MRB114 Lakey Jnr buried TS17 Chiefy hard, with the reds coming out for the latter. MRA294 Stuntman attacked LM595 Sal-mom on the red flags. At this stage MRE570 Dino Jnr lead from MRA331 Boxer Jack and MRD129 Will Morphey. The restart saw DI821 Dangerous set about MRA294 Stuntman which left him prone to an attack from MRC577 Lee. MRA331 Boxer Jack weighed in hard on DI821 Dangerous whose back axle was now fairly prone. MRA294 Stuntman delivered a head on to DI821 Dangerous while MRB341 Jonesy delivered the same treatment to DI548 Big Al which triggered a melee of action on the pits bend. DI547 Rhyno jacked MRA294 Stuntman. The former then received a head on from MRA331 Boxer Jack before copping a heavy tbone from MRB623 Tricky. DI821 Dangerous tboned MRA331 Boxer Jack, only to cop one on the nose in turn from MRB209 Tombo. The Damage Inc v Midnight Runners battled continued with several hits going in within the pile up from all angles. TL379 Iggle rejoined the fray to deliver a head on to MRB114 Lakey Jnr. MRE305 Cornish jacked TL379 Iggle, who received a revenge head on from MRB114 Lakey Jnr to round off a mega start to proceedings. MRE570 Dino Jnr was deemed the winner.

A slightly smaller field of 28 cars for Heat 2, although 274 Bond and 873 Roberts failed to make the start. It is worth noting also that there were no Damage Inc for this race as all were busy fixing their cars, and also MRC72 Bondy was working wonders conducting an engine change ready for the final. 26 made the green flag with the action commencing straight away. TS284 Heady Jnr followed MRD92 Morphey into the lurking MRB341 Jonesy. SL699 Stacey ran in MRB114 Lakey Jnr leaving her prone for a jacking from MRD713 The Duck. MRE570 Dino Jnr delivered a head on to LM595 Sal-mon whilst an unseen hit left MRA331 Boxer Jack snapped fairly big time down on the Caister bend. MRD713 The Duck dished a head on to WSM518 Stu. TS327 Maskell Jnr jacked MRD713 The Duck, as MRB341 Jonesy did the same to TS284 Heady Jnr. MRB341 Jonesy delivered a big head on to TS327 Maskell Jnr which left him open to be blasted by domestic rival MRE157 Domie. MRD92 dishes an on oppo attack to SL699 Stacey, as LM3 Bond jacked MRC2 Lee. MRC455 Micky gave a head on to LM595 Sal-mon, who was jacked in turn by MRD106 The Cheat. The Runners destroyed TS327 Maskell Jnr with several going in on the prone Micra before the race was stopped due to a fire on MRB341 Jonesy. MRD129 Morphey lead from TCR400 The Boy and WSM516 Gouldy. The restart saw MRE157 Domie put away WSM516 Gouldy. Whip Street Motors revenge was swift as WSM313 Scottie Dogg blasted MRE157 Domie. WSM313 Scottie Dogg continued his onslaught of Midnight Runners by burying MRD92 Morphey. MRC455 Micky jacked WSM313 Scottie Dogg ending his charge. MRE94 Cecil Jnr set about SL699 Stacey as MRD129 Will Morphey took the win followed home by brother MRD92 Charlie with teammate MRD106 The Cheat getting fourth earning them valuable points – only five cars going the distance.
129, 92, 94, 106, 400, NOF

The Final raised 24 cars. DI247 Bro was the first to show once again as he delivered a massive head on to MRE94 Cecil Jnr snapping his own car in the process. MRC2 Lee jacked DI247 Bro who recovered to administer a head on to MRC455 Cornish. 433 Smith jacked MRC455 Cornish, as MRB623 Tricky did the same to LM595 Sal-mon. DI821 Dangerous gave a head on to MRC455 Cornish. MRE94 Cecil Jnr turned it round to give a revenge jacking to DI247 Bro; Damage Inc revenge was swift as DI548 Big Al moved in to blast MRE94 Cecil Jnr. The race was stopped for MRC455 Micky who exited his car due to his belts snapping. LM447 Nail lead them away from the restart ahead of MRB114 Lakey Jnr and MRE570 Dino Jnr. MRD129 Morphey followed in DI548 Big Al. LM3 Bond spun aside TS33 Magic. MRA331 Boxer Jack came off the middle where he’d been most of the race due to be disqualified to jack DI247 Bro on oppo. 433 Smith dishes a huge shot on MRA331 Boxer Jack which stopped MRD129 Morphey’s charge must to the crowd’s delight. LM3 Toby Bond took the win, ahead of MRD106 The Cheat and MRC72 Bondy which secured the team championship for the Midnight Runners D Team.