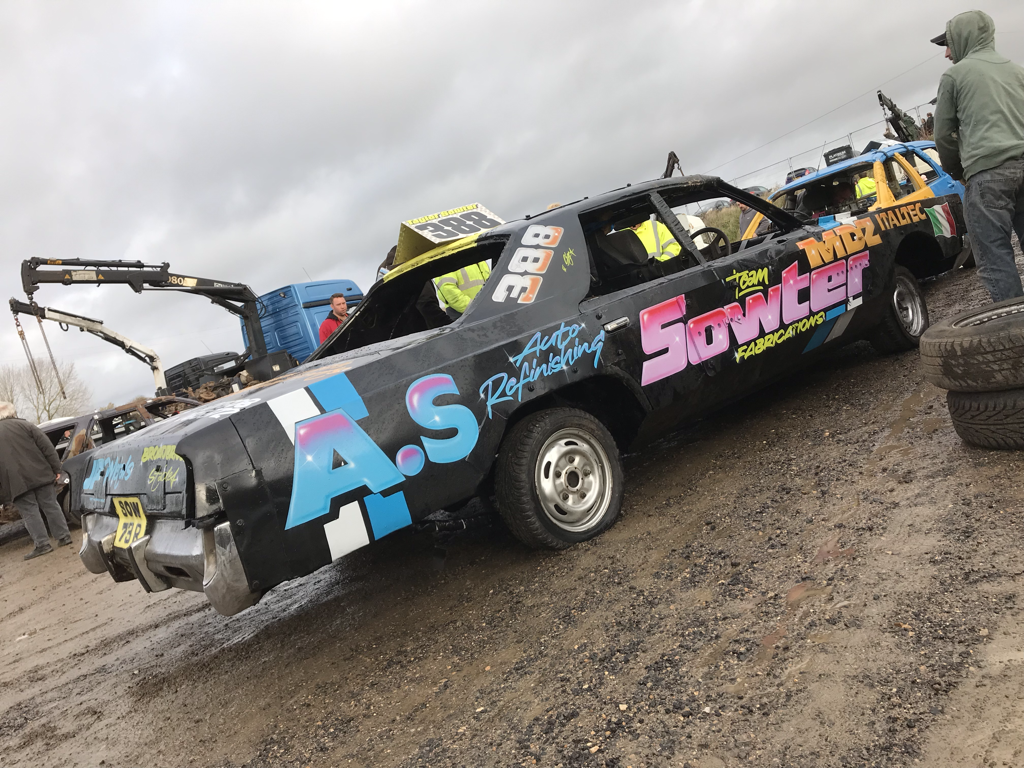 The first staging of the Caged Open took place at Standlake on Sunday 2nd December as just over 75 cars competed over the two classes. The Unlimited division saw 3 Yanks among the ranks with 388 Taylor Sowter bringing his well presented Chrysler New Yorker which earned the Car Award for them class. 103 Jacko and 199 Tomo had used Yanks, whilst 360 Jackstar had a Volvo 940 Limo. In the Unders class, the field was massively dominated by Ford Focus and Vauxhall Zafiras. 14 Steve Stallwood was given the car award for his Ford Capri as he dared to differ from the norm, whilst the Wickson brothers had the only two signwritten fresh motors with their Zafiras.

The Caged Open Final raised 20 cars; 209 Tombo and 161 The Entertainer making it out for their first appearances of the day after differing mechanical issues. 114 Lakey was the first to show as he followed in 777 Daunton. 260 Keefy spun 625 Lunchbox. 969 Phat took a wild lunge at 209 Tombo, burying himself big time in the process. 199 Tomo jacked 969 Phat – the red flags subsequently coming out for 969 Phat who needed medical attention. Phat eventually got out on his own accord. The restart saw 136 Junior spin. 114 Lakey had a nibble at 260 Keefy. 114 Lakey continued to chase down 260 Keefy and eventually put him away. 625 Lunchbox jacked 161 The Entertainer who was then picked up and followed in by 822 Smokey which marked the end of the action. 364 Nathan Olden took the inaugural Unlimited Caged Open ahead of Standlake Points Champion 7 Aaron Charles and 360 Jack Reynolds. 114 Lakey was given the Entertainer of the Meeting and the Merit Award went to 538 Rodders.

The Final raised 30 cars. 369 DT rattled in 170 Teal from the off as 84 Langridge attacked 784 Irish Andy. 84 Langridge continued his wrecking spree by jacking 226 Bricknell. 703 Whitaker weighed in on 84 Langridge. 325 Wiggles tboned 226 Bricknell but left himself prone to a jacking from 184 Gaughan. 747 Piglet weighed in on 325 Wiggles bringing the reds out as the latter was not comfortable taking any more shots. The restart saw the leading 169 JT set about 791 Tricky. 170 Teal jacked 784 Irish Andy who also came under fire from 88 Ballbag. 170 Teal jacked 418 Amie. 7 Aaron Charles took the win ahead of 246 Daniel Burt and 169 Jason Thompson. The Merit Award went to our Isle of Wight visitor 84 Jack Langridge who was in the right spirits all day. The entertainer of the day for the Unders went to 784 Irish Andy, who’s NSD attitude from the meeting start was something to be admired.

The Dash saw 12 cars return as the liveliness of the evening had clearly taken it’s toll! 720 Gabriel was an early spinner. 88 Ballbag attacked 277 Deano. 244 Bunny Jnr and 7 Aario had a little ding dong on the back straight as 9 Langdon attacked 784 Irish Andy. 88 Ballbag stuffed in 277 Deano as 9 Langdon turned it around to blitz 784 Irish Andy on oppo. 88 Ballbag went in for a head on to 9 Langdon. 720 Gabriel blasted 88 Ballbag. 244 Bunny Jnr ran in 277 Deano, as 499 Lee Charles took his second win of the evening.

The DD saw 10 cars up for ending the night’s action. 84 Langridge attacked 133 Bowles.
92 attacked 720 Gabriel. 499 Charles spun 420 Nixy who was jacked in turn by 244 Bunny Jnr. 170 Teal had a pop at 92. A fire broke out on 720 Gabriel drawing red flags. The restart saw 170 Teal slow to allow 499 Charles to deliver a hit – the latter only going in for a love tap on the back of the former. 499 Charles and 170 Teal met in a slow head on embrace. 170 Teal delivered an oppo attack on 246 Burty. 499 Charles delivered a solid jacking to 170 Teal. 246 Burty went in on 170 Teal and then gave the latter a head on which saw him go on fire. 499 Charles still weighed in for a hit on the flaming 170 Teal, who continued to fight of even with the fire. The marshalls eventually managed to get to 170 Teal to extinguish the flames. The result being deemed a three way tie.

Overall, a very successful first staging of our Caged Open which is set to be bigger next year. Thank you to all drivers, fans and teams for turning out and putting on a great show with action and close racing throughout all races starting with an awesome Unders Heat 1.