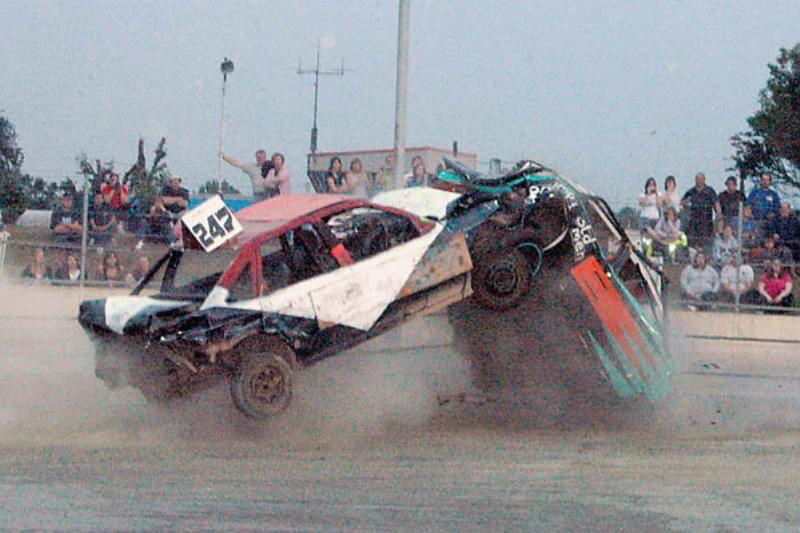 The first Thursday night of the 2006 summer season at Yarmouth Stadium took place on the 6th July, featuring both Rookie and Ladies Bangers.

The Ladies were also he first of the banger classes out on track, seeing 12 cars make the track. 761 Piglet had a crazy couple of laps, getting used to the whole width of the track. 712 spun on the Caister bend. 761 Piglet overcooked the pits bend massively seeing her take a trip to the ropes, later setting alight bringing a yellow flag. 516 Dizzy led the field away and was overtaken immediately by 774 Flecknell who had jumped the start. 409 Taylor spun 897 Smith on the last lap, and then ran into 712 who spun, with 516 Dizzy going bang on the final lap too. 774 Chrissy Flecknell took the win from 719 Emma Mancini and 516 Dizzy Tillet.

666 Steve Chamberlain earned himself a black cross for jumping the start of the race in Heat 2 for the Rookie Bangers. The non-contact in the first 3 laps rule seeing a couple also earned a black cross, with 61 Danny C lunging the pack of cars scuppering 59 Mann, 509 Dicky Boy and others on the entrance of the pits bend, and 412 Spike earning one for spinning 36 Hellraiser near the starter’s rostrum. Heat one winner 465 Webb spun 593 Holly down the back straight, but immediately retired with damage. 61 Danny C took up the running, and no sooner having done so, was turned fence-wards by 76 Aldridge. Aldridge was then spun aside along the back straight by 516 Gouldy. 61 Danny C got his revenge on 76 Aldridge, spinning him on the home straight. 516 Carl Gould motored to the win ahead of 412 Danny Sharman and 654 Dean Baker.

The final for the Ladies Bangers saw 10 cars return. 378 Roberts laid into 712, which also claimed 409 Taylor. 897 Smith had an off on the pits bend, and 712 spun once again on the Caister bend. The leading 774 Chrissy was nearly clobbered as 719 Mancini took out 897 Smith, but she survived to maintain the lead. 774 Chrissy Flecknell took the win from 422 Vickie Whiteman, who just managed to hold off 719 Emma Mancini for second, although the latter in trying to grab the second place turned Whiteman fence-wards after the flag.

The Rookie Bangers Final concluded the action. 317 Steve Thomson set the early running as he has done in both of the heats. In what seemed to be a theme for the Heat winners, 516 Gouldy expired early on pulling onto the centre. Several came together on the exit of the pits bend including 148 Lown, 610 Trouble and others. 610 Trouble recovered to spin aside 721 of the Allen Boyz, with 666 Chamberlain meeting the latter head on. 730 Ginge was dispatched at the end of the back straight. 654 Baker set about 509 Dicky Boy along the home straight. 266 Huffers laid into 730 Ginge. 412 Spike removed 515 Wishbone after the flag, with 61 Danny C following the former on the Caister bend – 610 Trouble jacking 61 Danny C to conclude the action. 148 Trevor Lown taking the win.